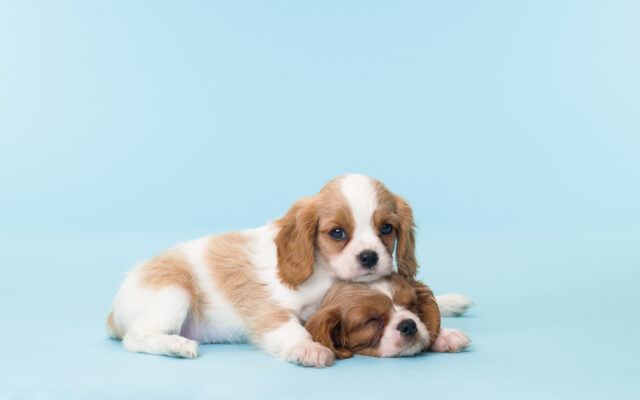 49% of Americans consider themselves a “dog person.”  68% of dog owners let their dog sleep in bed with them at least once a month.  And 70% of dog owners include their dog’s name when they send out holiday cards.

1. 53% of Americans think dogs make better pets than cats. Only 21% said cats. Everyone else couldn’t decide, or said they don’t like cats OR dogs.

3. 79% of women and 67% of men find it attractive when someone is outwardly affectionate toward dogs.

4. A recent survey found ALL states love dogs, but people in California, New York, and Washington love them the most.

5. 68% of dog owners let their dog sleep with them at least once a month.

6. A poll found 45% of Americans have at least one dog living with them. It was done before the pandemic though, so it might be higher now.

7. One in three Americans say a hot dog is a sandwich. That’s not an ACTUAL dog fact, but it’s dog-adjacent.

8. Our favorite dog breeds in 2021 are Labs, golden retrievers, and Alaskan malamutes.

9. 49% of us think we could beat a medium-sized dog in a fight. 23% also think they could take down a large dog if they really needed to.

10. Just like fingerprints, every dog’s nose print is unique.

11. 70% of dog owners include their dog’s name when they send out holiday cards.

12. Yawning is contagious, even for dogs. And they’re four times more likely to do it if someone they KNOW yawns instead of a stranger.

13. Australian shepherds aren’t from Australia. They were originally bred in the U.S.

14. Puppies are born deaf. They can’t hear until they’re around three weeks old. But dogs aren’t colorblind like some people think. They can see blue and yellow pretty well.

15. The largest dog ever was a Mastiff named Zorba that weighed 343 pounds. The smallest was a Chihuahua named Milly that weighed ONE pound.