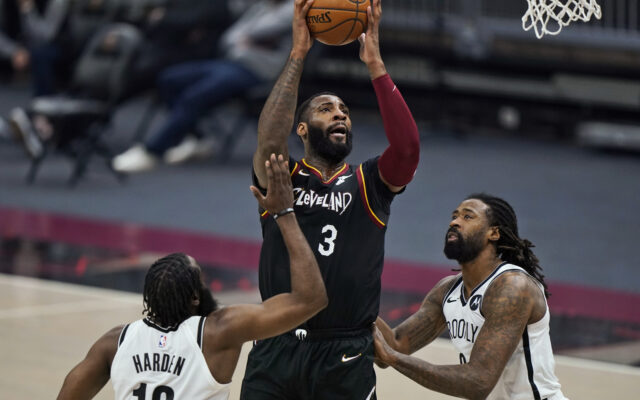 Cleveland Cavaliers' Andre Drummond (3) drives to the basket against Brooklyn Nets' James Harden (13) and DeAndre Jordan (6) during the first half of an NBA basketball game Friday, Jan. 22, 2021, in Cleveland. (AP Photo/Tony Dejak)

The Cavaliers are trading JaVale McGee to the Denver Nuggets  for third-year center Isaiah Hartenstein and two future protected second-round picks, per ESPN’s Adrian Wojnarowski. Trading for McGee  gives the Nuggets some rim protection on defense, as he’s averaging 1.2 blocks a game. Denver ranks 11th in the league in points allowed in the paint (48.8), and adding McGee could potentially help with that. In 33 games with Cleveland, McGee averaged eight points and 5.2 rebounds while coming off the bench for the Cavaliers. McGee wasn’t getting a ton of consistent minutes with Cleveland, and being traded to Denver allows him to once again join a contending team.

The New York Knicks have emerged as a potential destination for Andre Drummond, according to Kevin O’connor of the Ringer. Drummond, who was averaging 17.5 points and 13.5 rebounds, has not played in a game since Feb. 21 as the Cavaliers organization decided that they would not be retaining him past this season. Chris Fedor of Cleveland.com reports Cleveland is hoping to get at least a draft pick in return and is willing to wait all the way to Thursday’s 3 p.m. ET deadline to get a deal done.

On the web, NerdBear is looking for someone to watch every James Bond movie. The chosen candidate will get a thousand bucks, a $100 Amazon gift card to rent the movies, AND a $50 AMC gift card to see the newest Bond film. They’re taking application until April 16th. By the way, the release date for the new James Bond movie, “No Time To Die,” has been pushed back to September 30th.

Right now, one of the biggest commodities on eBay, for some reason, is those little hot sauce packets you can pick up at Taco Bell. There was a recent purchase of a 40-pack of a variety of the sauces that sold for $12.99.

The Indians regular season is one week from today. Welcome back 33-year-old Bryan Shaw has made the opening day roster after  posting a 2.79 ERA through his first 10 Cactus League outings, with 13 strikeouts and five walks in 9 2/3 innings entering Wednesday. Shaw adds a veteran presence to a group of young hurlers, James Karinchak, Emmanuel Clase, Nick Wittgren, Trevor Stephan and most likely Phil Maton as locks for the Tribe’s bullpen. And with Adam Plutko expected to handle a multi-inning role, that leaves one spot open for Kyle Nelson, Blake Parker, Anthony Gose or Oliver Pérez in the final week of camp.

The Browns hosted  Jadeveon Clowney, for a free agent, on a visit yesterday. Clowney left the team facilities and returned to his home without signing with the team, per ESPN’s Adam Schefter. The visit made the official NFL transactions list for the day but there was no indication  of any signing. The No. 1 overall pick in the 2014 NFL draft signed with the Tennessee Titans last year, inking a one-year, $13 million deal. The Titans didn’t get a lot of bang for their buck. Clowney failed to record a single sack, managing just four TFLs among 19 tackles in eight games. He has just three sacks in 21 games in the last two seasons, though Clowney, 28, remains an above-average run defender and still generates pressure as both an end and an interior presence.

William Shatner may be best know for his role in “Star Trek,” but says he’s never seen an episode of the show.

Shatner, who turned 90 this week told People magazine that it’ “too Painful” to watch himself act as Captain James T. Kirk in the series which aired from 1966-1969. He added that he did watch one of the franchise’s many movies, “Star Trek V: The Final Frontier,” but only because he directed it.

Today in 1954,  the first consumer-oriented color television was sold. Made by RCA, it retailed for more than $1200.

Today is Michael Stanley Day in Cleveland. Radio stations throughout Northeast Ohio joined together to play Stanley’s hit ‘My Town’ simultaneously at 10:35 a.m. It marks what would have been the rocker’s 73rd birthday, which comes less than three weeks after he passed away. The Rock Hall in downtown Cleveland hosted fans as they joined with Stanley’s family and band members for a special presentation in the outdoor plaza at 10:15 a.m. Greg Harris, the President and CEO of the Rock Hall, called Stanley “Cleveland’s treasure” during today’s tribute.