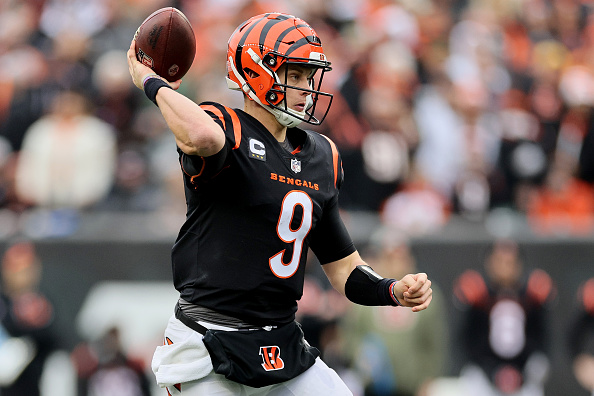 CINCINNATI, OHIO - DECEMBER 11: Joe Burrow #9 of the Cincinnati Bengals looks to pass in the first half of a game against the Cleveland Browns at Paycor Stadium on December 11, 2022 in Cincinnati, Ohio. (Photo by Andy Lyons/Getty Images)

Grammy’s will be held Sunday February 5

Avatar: The Way of Water” is the #1 movie at the box office for the 6th week in a row

Top movies at the box office

OMG, the Dallas kicker Maher missed another extra point. It was blocked, but it didn’t look like it had a chance.

NFC and AFC Championships are set

The Eagles are an early 2.5pt. favorite

Kickoff is at 6:30 with Kansas City an early 1pt. Home favorite

Shannon Sharpe issued and apology for his outburst at the Grizzlies, Lakers game on Friday night

During a three-minute opening monologue on “Undisputed,”

Sharpe apologized to the fans, Jeanie Buss, the Lakers organization, the Grizzlies, Dillon Brooks, Ja Morant, LeBron James, his network and even his stylist for the unwanted attention.

In a new survey, people were asked which was their least favorite national landmarks they’d seen.

Other unpopular ones are:  The Brooklyn Bridge . . . Times Square . . . and the Hollywood Walk of Fame.

The New Ferris Wheel in town hasn’t been rated yet.

the Pearl Harbor National Memorial . . . and the Statue of Liberty.

No telling if Joey Chestnut ate in in 35 minutes.

TikTok claims you can cure a hangover by dunking your face in ICE WATER over and over.  It activates something called the “diver’s reflex” that might give you temporary relief.  It’s not a true “cure” though.

If you want to try it, just fill a bowl with ice water . . . dunk your entire face in it for 10 seconds . . . and repeat it two more times.  Most people immediately say it worked, and then say never mind.

“The only true hangover cure on Monday is to not drink on Sunday!”

39 years ago – In 1984, Hulk Hogan beat the Iron Sheik at Madison Square Garden to win his first WWF wrestling title.

38 years ago – 1985 – O.J. Simpson became the first Heisman Trophy winner to be elected to pro football’s Hall of Fame in Canton, OH.