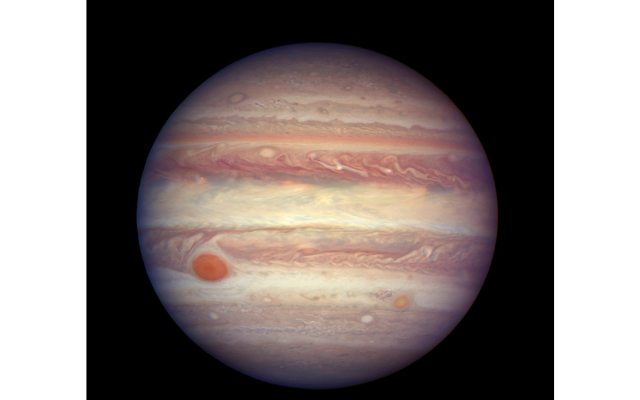 FILE - This April 3, 2017 file image made available by NASA shows the planet Jupiter when it was at a distance of about 668 million kilometers (415 million miles) from Earth. On Monday, May 21, 2018, scientists reported that an asteroid sharing Jupiter’s orbit, but in reverse, actually hails from a neighboring star system. They say the asteroid, known as 2015 BZ509, has been in this peculiar backward orbit ever since getting sucked into our solar system in the first moments after our solar system formed 4.5 billion years ago. (NASA, ESA, and A. Simon (GSFC) via AP, File)

HUNTSVILLE, Alabama (News Talk 1480 WHBC) – The largest planet in our Solar System is very close to us on Monday.

Jupiter is “just” 367 million miles away on Monday.

It can be as distant as 600 million or more miles.

The gas giant is on the exact opposite side of the Sun from the Earth in its orbit, says NASA, and that’s when it’s at its closest.

It’ll be visible in the eastern sky soon after the sun sets.