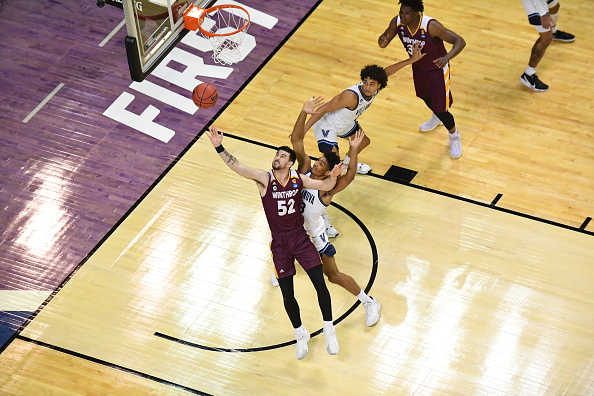 INDIANAPOLIS, IN - MARCH 19: Chandler Vaudrin #52 of the Winthrop Eagles puts the ball up against Jermaine Samuels #23 of the Villanova Wildcats in the first round of the 2021 NCAA Division I Mens Basketball Tournament held at Indiana Farmers Coliseum on March 19, 2021 in Indianapolis, Indiana. (Photo by Josh Duplechian/NCAA Photos via Getty Images)

A year after tearing his ACL in a summer league game for the Cavs, Lake high school grad Chandler Vaudrin is back healthy, on the court and will be playing for the Cleveland Charge.

Vaudrin, who played collegiately at both Walsh and Winthrop, has made the opening day roster for the Charge as an affiliate player at the forward poition.

CLEVELAND – The Cleveland Charge of the NBA G League have finalized their roster to begin the 2022-23 season.  The team has waived G Djimon Henson, G Remy Martin, and F Chris Walker to set the roster at 12 players, including 10 Charge players and a pair of Cavaliers Two-Way players.

The Charge roster is led by Cleveland Cavaliers Two-Way players F Mamadi Diakite and F Isaiah Mobley.  Four players also spent time in training camp with the Cavs and join the Charge as affiliate players: G Sharife Cooper, G Didi Louzada, F Jamorko Pickett, and F Chandler Vaudrin.  G Nate Hinton also was in training camp with the Cavs this past month, with the Charge acquiring his rights earlier this offseason in a trade.

The team will begin the 2022-23 season at home when they host the Motor City Cruise (Detroit Pistons) at CSU’s Wolstein Center this Friday, November 4th at 7:00 p.m.

The Charge’s detailed roster is below: