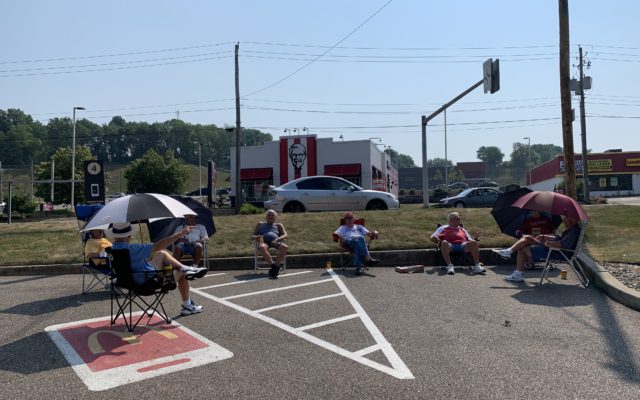 CANTON (News Talk 1480 WHBC) – In a pandemic stricken world where change is constant, something as simple as a cup of coffee with old friends can bring everyone a bit closer to normal.

From the fireworks show at the McKinley Monument on the fourth of July, to this year’s Hall of Fame enshrinement week events, it seems as though every local tradition has been canceled. A simple drive down Cleveland Avenue North would prove that theory wrong.

Shortly after the original stay at home order was issued in late March, a commute into downtown Canton looked much different. There were less cars on the streets and fewer open signs hanging in the windows of businesses.

However, in a new world where most are staying indoors, those who pass by the McDonald’s on the corner of Cleveland Avenue North and 31st street will notice a small group that has been doing the opposite. About a dozen men, sitting in lawn chairs, huddled under umbrellas to protect their skin from the elements, enjoying their morning coffee.

As the months flew by and things began to change the group remained in their spot, sitting in a socially distant circle in the corner of the fast food restaurant’s parking lot. Those who pass by see a group of older men, having coffee together. Those who sit down and chat with them are introduced to the Greek/Italian Club.

“We’ve been doing this for at least twenty years,” yells Richard Forte when asked how long they’ve been meeting. “Oh it’s been much longer than that!” exclaimed Frank Rizzo who was sitting in the chair next to him.

Forte and Rizzo are just a few members of the colorful and charismatic group of older gentlemen who start their morning with the same routine. Rizzo, at the age of 88 is the oldest member of the self-named group. He says the tradition started at the old McDonald’s that was located on 44th street.

“We outlived it and we outgrew it,” joked Rizzo with a smile.

On March 15, the Ohio Department of Health issued an order limiting all restaurants to carry out or delivery only. For the first time in decades (the amount is still being debated) the Greek/Italian club was unable to participate in their daily meeting.

While the order shutting down indoor dining was not lifted until mid-May, the group was simply too determined to wait that long for a reunion. In late March one of the members, Jose Rante of North Canton had an idea. Meet at McDonald’s, just not in McDonald’s.

“Everybody was lonely at home and then we started calling each other,” explained Ron Lemmo of Canton. “Before you knew it, word got out that we were all coming here.”

After a few weeks apart, the gang was back together. Similar to the days when they met inside, group size would differ by the day. But one constant had returned, daily conversation over a wide range of deep topics.

“Sports, women and money,” said Ed Miller of Plain Township. “It’s sports 95 percent of the time. We have fifteen experts here. As soon as the last guy speaks, the next guy will tell him why he is wrong.”

The group members were not the only ones who were happy the meetings found a way to continue. Sharon Cooley, the manager of the McDonald’s that serves as the club’s headquarters says the guys never fail to put a smile on her face.

“We all talk to them when we come in,” said Cooley. “I go out there for probably five to ten minutes before I start my work day and just talk to them. They’re a nice bunch of guys.”

Cooley says that customers have had nothing but great things to say about the club. She added that the outdoor meetings have received even better reception.

“Its always positive,” said Cooley. “I haven’t heard anything negative about it since the pandemic.”

Cooley mentioned that prior to the pandemic some had complained about the group taking up all of the parking spaces. However, she says employees have never had an issue with the group.

Meanwhile, the group has certainly come to enjoy its new popularity.

“They take pictures of us,” said a smiling Dick Brankel of Canton. “Sometimes they even offer to buy us coffee!”

The group made it very clear that free food, drinks and gift cards to McDonald’s will be happily accepted at all times. However, they are sure to always return the favor.

“Today we had doughnuts and a lady stopped by,” said Miller. “We gave her a doughnut and she spent a little time with us.”

Other businesses have even attempted to convince them to relocate.

“One person offered us coffee for free every day if we moved our meetings in front of their business,” said Ron Carahan of Millersburg. “It was nice but we are happy where we are now.”

Andrew Pertginides and Doug Xides of Canton, two of the longest tenured members of the group shook their heads in agreement.

Whether if the meetings take place indoors or outside in the parking lot, the group says the only thing that matters is that they are able to continue to meet and spend time with each other.

“As you get older you’ve got to have comradery,” said Miller. “This is really good comradery for us old guys. Some of us are married, some of us aren’t. Us guys who aren’t married, this is a good thing for us.”