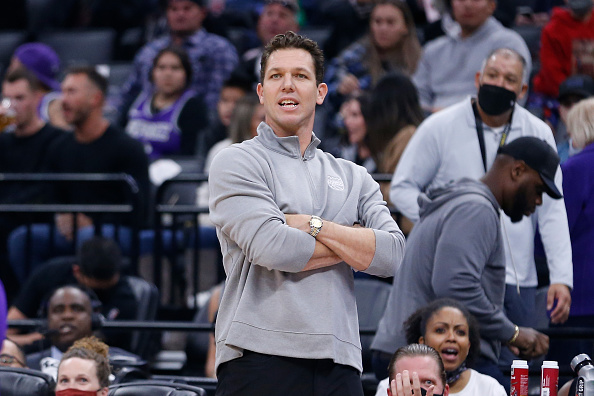 SACRAMENTO, CALIFORNIA - NOVEMBER 20: Luke Walton head coach of the Sacramento Kings looks on during the first half against the Utah Jazz at Golden 1 Center on November 20, 2021 in Sacramento, California. NOTE TO USER: User expressly acknowledges and agrees that, by downloading and/or using this photograph, User is consenting to the terms and conditions of the Getty Images License Agreement. (Photo by Lachlan Cunningham/Getty Images)

“We are very excited to add someone of Luke’s caliber and championship DNA to our coaching staff,” said Altman. “His on-court experiences as a head coach, assistant coach and player in this league fit seamlessly into J.B.’s existing coaching staff. Luke is someone who truly embraces player development, a team-first mentality, and a history of creating winning basketball habits. We welcome Luke, his wife Bre and the entire Walton family back to Northeast Ohio.”

Walton brings over a decade of coaching experience to Bickerstaff’s staff and was most recently the head coach of the Sacramento Kings for the previous three seasons (2019-2021). Prior to being at the helm for the Kings, Walton was the Los Angeles Lakers’ head coach from 2016 to 2019, improving the team’s win total in each of those seasons. This included consecutive nine-game improvements in his first two seasons with the team (2016-17, 2017-18).

“It’s rare when you can strengthen your staff with someone of similar experiences and a passion for the game of basketball,” said Bickerstaff. “Luke is someone who identifies with our five core values as a coach, but also traits he was recognized for as a player, both in college and the NBA. I’m excited for our players to have another valuable resource to work with on the court, as we continue doing things the right way for sustainable success.”

Additionally, Walton was an assistant coach with the Golden State Warriors for two campaigns (2014-15, 2015-16), reaching the NBA Finals both years and winning the NBA Championship in 2015. Walton also received Western Conference Coach of the Month honors (October/November 2015) while serving as interim head coach in Steve Kerr’s absence and leading Golden State to a 39-4 start in 2015-16, including winning the first 24 games, an NBA record. Prior to joining the Warriors coaching staff, Walton served as a player development coach for the South Bay Lakers, the Lakers NBA G League affiliate, in 2013-14. The San Diego native also served as an assistant coach at the University of Memphis during the 2011 NBA lockout.

Walton, 42, enjoyed a 10-year NBA playing career, including his final season in 2012-13 and part of 2011-12 as a member of the Cavaliers. He finished his career appearing in 564 games (138 starts) with the Lakers and Cavaliers while averaging 4.7 points, 2.8 rebounds and 2.3 assists in 17.2 minutes per contest. Walton was the No. 32 overall pick in the 2003 NBA Draft by the Lakers, where he made seven postseason appearances and was a member of back-to-back NBA Championship teams in 2009 and 2010. Prior to his professional basketball career, Walton played collegiately at the University of Arizona where he was named an All-Pac-10 performer twice in his four-year career (1999-2003), received John R. Wooden All-American honors as a junior and was a Wooden Award Finalist as a senior.