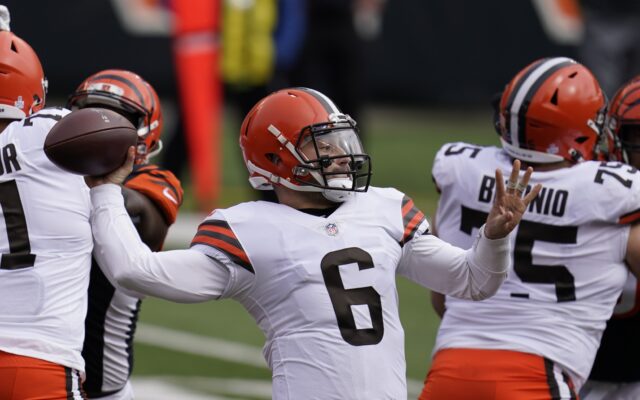 Baker Mayfield’s 5th touchdown pass of the day, a 24 yarder to rookie wide out Donovan Peoples-Jones finished off a 75 yard game winning drive for the 3rd year quarterback and the Browns escaped Cincinnati with a 37-34 win.

Mayfield, who started the game 0-5 with an interception, went on to complete his next 21 passes, but it was his final pass the was the prettiest and most important and it gave the Browns their 5th win of the season.

On Mayfield’s first pass of the game, his lone interception, the Browns lost wide receiver Odell Beckham Jt. to a knee injury. OBJ will have an MRI on Monday, but various media reports say it could be a serious injury.

While Baker was rolling, he wasn’t the only one having a big game or making big plays for head coach Kevin Stefanski and the Browns. Cleveland also got major contributions from:

Bengals rookie number #1 overall pick, quarterback Joe Burrow did all he could to beat the Browns, throwing for 406 yards and 3 touchdowns, while also rushing for a td. Burrow did fumble once and threw an interception. With the loss, Cincy fell to (1-5-1) on the year.

Cleveland is now (5-2) on the year and will host the Las Vegas Raiders Sunday at 1pm. You can hear that game and all the Browns games this season right here on News-Talk 1480 WHBC.

Also, don’t forget, right after the game,  WHBC’s Kenny Roda will host a Browns postgame show “LIVE” on Facebook and Twitter where he will answer all of your questions and react to the Browns game.