Mayfield Out, Keenum To Start Against Broncos 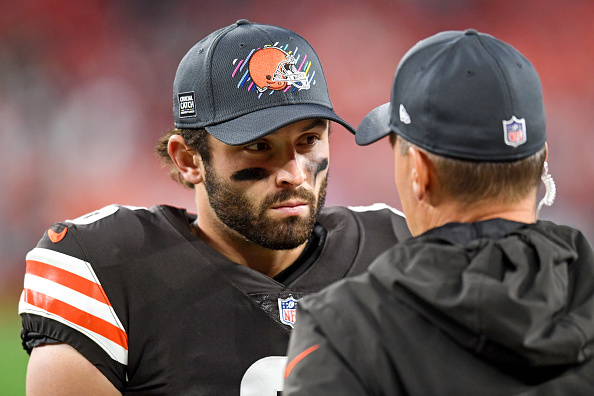 CLEVELAND, OH - OCTOBER 17: Baker Mayfield #6 of the Cleveland Browns talks with a trainer in the fourth quarter against the Arizona Cardinals at FirstEnergy Stadium on October 17, 2021 in Cleveland, Ohio. (Photo by Nick Cammett/Diamond Images via Getty Images)

Baker Mayfield, who had started 51 consecutive games, is dealing with an injury to his left, non-throwing shoulder

Berea, Ohio – Veteran QB Case Keenum will make the first start of his Browns career Thursday against the Broncos.

Baker Mayfield, who had started 51 consecutive games since his rookie season in 2018, continues to recover from an injury to his left, non-throwing shoulder and will not play Thursday. Though Mayfield wanted nothing more than to continue the streak, the Browns will roll with Keenum, who has started 62 games since 2013, for the primetime matchup at FirstEnergy Stadium.

“Case Keenum will be our starter tomorrow night and we have full confidence in him to lead us and do the things necessary to put us in position to win,” Browns coach Kevin Stefanski said. “Baker fought really hard to play, he’s a competitor and obviously wants to be out there but just couldn’t make it on a short week. We know he will continue to do everything in his power to return as quickly as possible.”

Keenum came to Cleveland in 2020 after one season in Washington, where he started eight games and finished with 1,707 yards, 11 touchdowns and five interceptions. Keenum’s best season was 2017 in Minnesota, when he worked closely with Stefanski, who was the team’s quarterbacks coach, and started 14 games for the NFC North champion Vikings. He completed a career-best 67 percent of his passes for 3,547 yards, 22 touchdowns and just seven interceptions.

Keenum signed with the Broncos in 2018 and started all 16 games, completing 62 percent of his passes for a career-high 3,890 yards, 18 touchdowns and 15 interceptions.

In his time with the Browns, Keenum has appeared in four games and completed 6-of-13 passes for 52 yards. During the 2021 preseason, he completed 33-of-48 passes for 298 yards, a touchdown and an interception.