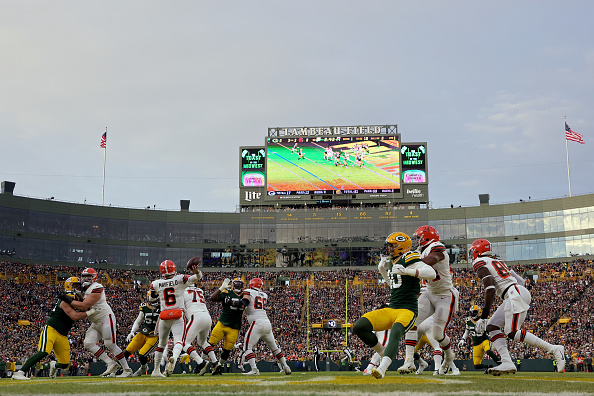 GREEN BAY, WISCONSIN - DECEMBER 25: Baker Mayfield #6 of the Cleveland Browns throws a pass in the first quarter against the Green Bay Packers at Lambeau Field on December 25, 2021 in Green Bay, Wisconsin. (Photo by Stacy Revere/Getty Images)

Baker Mayfield’s 4 interceptions and some questionable play calling by head coach Kevin Stefanski led to another heartbreaking loss by the Browns, as they fell to the Packers 24-22 in Green Bay on Christmas day.

Mayfield was picked off 3 times in the first half and Green Bay quarterback Aaron Rodgers turned all 3 interceptions into a 21-12 halftime lead and in the process, passed Brett Farve for most touchdown passes in Packers history with 445.

The Browns would cut “The Pack’s” lead to 24-22 and had the ball with 2:05 left in the game, but Mayfield’s pass intended for Donovan Peoples-Jones was intercepted at the Green Bay 40 yard line and the Packers ran out the clock. It looked like Peoples-Jones was held on the play, but no penalty flag was thrown.

Mayfield’s final pass was his 36th attempt of the game, making many wonder why Stefanski, who calls the offensive plays, threw the ball so many times in the contest when Nick Chubb and the running game racked up 219 yards on the ground on only 25 carries and averaged 8.8 yards per carry.  Starting Browns safety John Johnson III, who did not play in the game because he was injured, echoed those sentiments when he tweeted while watching the game at home: RUN THE DAMN BALL!

Chubb rushed for 126 yards and 1 touchdown, but only carried the ball 17 times and had to be wondering why as he walked off the field following the 2 point loss.

Mayfield finished the game 21 for 36 for 222 yards, 2 touchdowns and those 4 interceptions.

With the loss, Cleveland falls to (7-8) on the year with 2 games left, a Monday nighter, January 3rd at Pittsburgh, and a home game against the Bengals on Sunday, January 9th to close out the regular season.

Despite the loss, the Browns can still make the playoffs if they win out, but would need a lot of help from other teams to get back to the postseason for the second year in a row.

Green Bay improved to an NFL leading (12-3) record and the Packers have already clinched the NFC North division title.