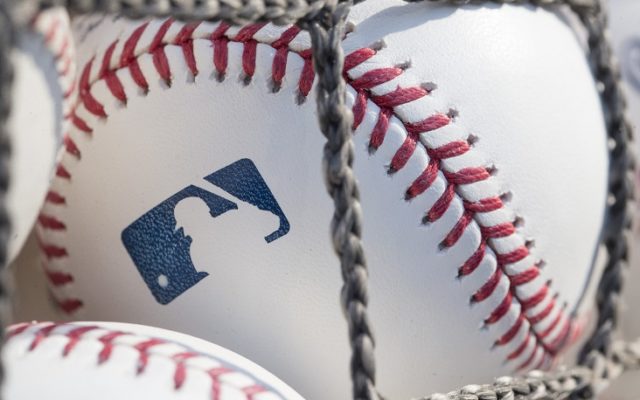 PHILADELPHIA, PA - JUNE 28: A baseball with MLB logo is seen at Citizens Bank Park before a game between the Washington Nationals and Philadelphia Phillies on June 28, 2018 in Philadelphia, Pennsylvania. (Photo by Mitchell Leff/Getty Images)

Major League Baseball’s owners and the Players Association could not come to a new agreement by 11:59pm eastern time on Wednesday, December 1, 2021, so the owners have locked the players out. It’s the first lockout since 1990.

I first want to thank you for your continued support of the great game of baseball. This past season,

the difficult challenges of a global pandemic. As we began to emerge from one of the darkest

and millions of families felt the joy of watching baseball together.

That is why I am so disappointed about the situation in which our game finds itself today. Despite

the league’s best efforts to make a deal with the Players Association, we were unable to extend our

CBA expired. Therefore, we have been forced to commence a lockout of Major League players,

I want to explain to you how we got here and why we have to take this action today. Simply put,

we believe that an offseason lockout is the best mechanism to protect the 2022 season. We hope

season to start on time. This defensive lockout was necessary because the Players Association’s

vision for Major League Baseball would threaten the ability of most teams to be competitive. It’s

simply not a viable option. From the beginning, the MLBPA has been unwilling to move from

their starting position, compromise, or collaborate on solutions.

When we began negotiations over a new agreement, the Players Association already had a contract

that they wouldn’t trade for any other in sports. Baseball’s players have no salary cap and are not

subjected to a maximum length or dollar amount on contracts. In fact, only MLB has guaranteed

contracts that run 10 or more years, and in excess of $300 million. We have not proposed anything

that would change these fundamentals. While we have heard repeatedly that free agency is

“broken” – in the month of November $1.7 billion was committed to free agents, smashing the

prior record by nearly 4x. By the end of the offseason, Clubs will have committed more money to

players than in any offseason in MLB history.

We worked hard to find compromise while making the system even better for players, by

addressing concerns raised by the Players Association. We offered to establish a minimum payroll

for all clubs to meet for the first time in baseball history; to allow the majority of players to reach

manipulation; and to increase compensation for all young players, including increases in the

minimum salary. When negotiations lacked momentum, we tried to create some by offering to

accept the universal Designated Hitter, to create a new draft system using a lottery similar to other

leagues, and to increase the Competitive Balance Tax threshold that affects only a small number

challenges every single time during my tenure. Regrettably, it appears the Players Association

came to the bargaining table with a strategy of confrontation over compromise. They never

wavered from collectively the most extreme set of proposals in their history, including significant

cuts to the revenue-sharing system, a weakening of the competitive balance tax, and shortening

the period of time that players play for their teams. All of these changes would make our game

To be clear: this hard but important step does not necessarily mean games will be cancelled. In

fact, we are taking this step now because it accelerates the urgency for an agreement with as much

runway as possible to avoid doing damage to the 2022 season. Delaying this process further would

only put Spring Training, Opening Day, and the rest of the season further at risk – and we cannot

allow an expired agreement to again cause an in-season strike and a missed World Series, like we

experienced in 1994. We all owe you, our fans, better than that.

Today is a difficult day for baseball, but as I have said all year, there is a path to a fair agreement,

and we will find it. I do not doubt the League and the Players share a fundamental appreciation for

this game and a commitment to its fans. I remain optimistic that both sides will seize the

opportunity to work together to grow, protect, and strengthen the game we love. MLB is ready to

work around the clock to meet that goal. I urge the Players Association to join us at the table.