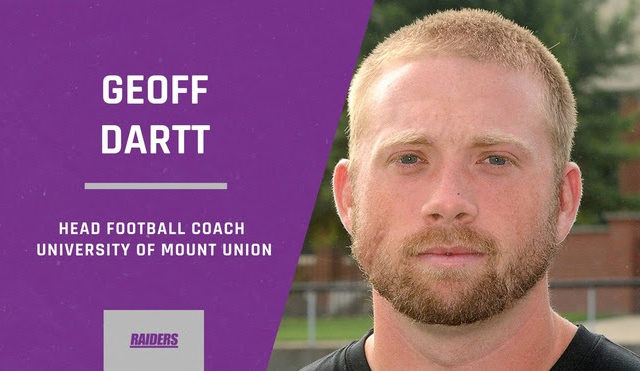 Image courtesy of the University of Mount Union.

ALLIANCE (News Talk 1480 WHBC) – The Mount Union football program is sticking to what they know and who they know. This afternoon the University announced that Geoff Dartt has been named the 24th coach in the school’s history. He is just the fourth to hold the position since 1962.

Dartt of course replaces Vince Kehres, who won two National titles in his seven years with the Purple Raiders. Kehres, took over in 2013 after his father and college football hall of famer, Larry Kehres retired.

Dartt has spent seven years as an assistant coach for Mount Union. In five of those seven seasons he was the offensive coordinator. During that time period he manufactured a Purple Raider offense that led the nation in nine different categories.

Like many others on the staff, Dartt is a Mount Union graduate (2008). The Port Clinton native played offensive line, earning an All- Ohio Athletic Conference selection in 2007. He was also a part of three National Championship teams (2002, 2005, 2006).

Following a four year coaching stint at Wheaton College (2008-2012), Dartt returned to Mount Union in 2012 to coach the offensive line. In his first year back, the Purple Raiders won their 11th National title.

Dartt departed from Alliance once again in 2017, to coach offensive line at Western Kentucky University. He came back to Mount Union the following season. That same year, he was named OAC Assistant coach of the year.