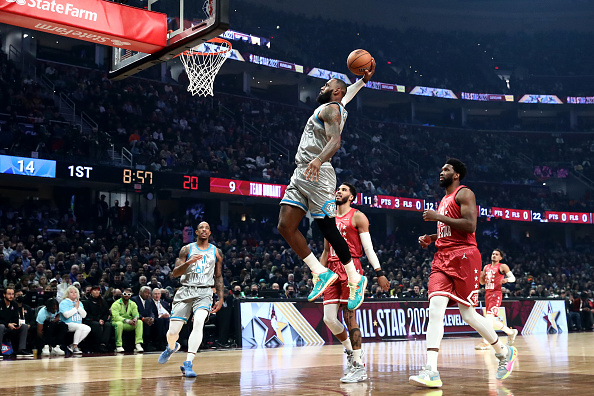 CLEVELAND, OHIO - FEBRUARY 20: LeBron James #6 of Team LeBron dunks the ball in the first half during the 2022 NBA All-Star Game at Rocket Mortgage Fieldhouse on February 20, 2022 in Cleveland, Ohio. NOTE TO USER: User expressly acknowledges and agrees that, by downloading and or using this photograph, User is consenting to the terms and conditions of the Getty Images License Agreement. (Photo by Tim Nwachukwu/Getty Images)

Rocket Mortgage Fieldhouse in Cleveland, Ohio was the center of the basketball universe over the weekend as it hosted the 71st Annual NBA All Star Game. Cleveland previously hosted the All Star Game two other times in 1997 and 1981.

Here’s a breakdown of how the All Star Weekend events played out Friday, Saturday and Sunday:

Using a tournament style format with the “Elam Ending”, which features a target score, Team Barry defeated Team Thomas 25-20 in the championship game to win the Rising Stars challenge on Friday night at Rocket Mortgage Fieldhouse.

Four of the NBA’s 75 greatest players of all time James Worthy, Gary Payton, Isaiah Thomas and Rick Barry each coached a team made up of first- and second-year NBA players, along with some G-League Ignite players.

In the championship game played to 25 points, Team Barry rallied to win the title behind tournament MVP, Cade Cunningham of the Pistons, who was the first overall pick in 2021 NBA draft. Cavaliers Evan Mobley and Isaac Okoro were also on the winning team.

In the celebrity All-Star game Friday night played at Cleveland State’s Wolstein Center, Team Walton defeated Team Wilkins 65–51.  Peloton instructor Alex Toussaint was named the game’s MVP for the winning side.  Browns defensive end Myles Garrett was the star on the losing side with 13 points and 8 rebounds and delivering a number of crowd-pleasing dunks and ferocious blocked shots.

The Cavs team of Jarrett Allen, Evan Mobley and Darius Garland won the Skills Challenge competition beating the Rookies team and the Antetokounmpo brothers. Evan Mobley broke the tie and secured the win hitting a half court shot!

LeBron James hit the game-winning jumper and finished with 24 points in the contest.

At halftime of the game, Michael Jordan, Magic Johnson, Kareem Abdul Jabbar, Jerry West, LeBron James, Shaq and many other of the living players who were named to the NBA’s 75th anniversary team were honored during a ceremony at Rocket Mortgage Fieldhouse.