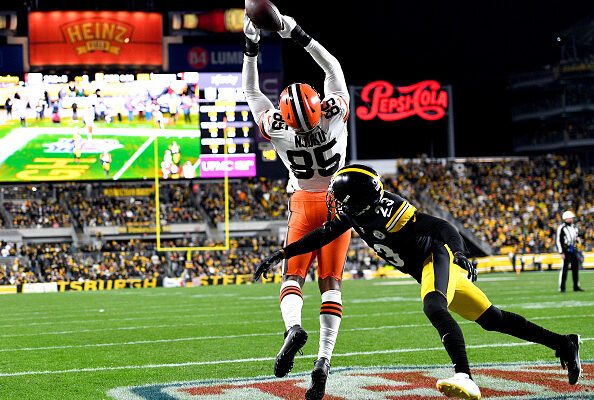 PITTSBURGH, PENNSYLVANIA - JANUARY 03: David Njoku #85 of the Cleveland Browns catches the ball for a touchdown against Joe Haden #23 of the Pittsburgh Steelers in the third quarter of the game at Heinz Field on January 03, 2022 in Pittsburgh, Pennsylvania. (Photo by Joe Sargent/Getty Images)

After five years in Cleveland, Njoku is set to enter the prime of his career in a Browns uniform

David Njoku made it abundantly clear at the end of 2021 that he wanted his NFL future to stay in Cleveland.

The five-year tight end veteran and 2017 first-round pick was approaching the end of his rookie contract, and after five seasons in Cleveland — the last two of which featured playoff hunts — he didn’t want to go anywhere else.

“I love it here,” he said in January. “I love it here to the core. I honestly want to be here for the rest of my career … It’s our dream to bring a championship here in Cleveland.”

The Browns are now giving Njoku a chance to do that.

He signed a contract extension Wednesday that will keep him in Cleveland through 2025. The 25-year-old has already spent half of a decade with the Browns and will now get to spend at least the next four years with them as he enters the prime of his career.

“We are pleased to secure David Njoku’s presence in Cleveland with this extension,” Browns VP of Football Ops and GM Andrew Berry said. “David’s multi-faceted skill set in both the run and pass game is a key component of our offensive system. His ability to generate explosive plays with his athleticism, speed and run-after-catch ability along with his productivity as a blocker on the line of scrimmage is a difficult combination to find in a single player. We’ve seen David grow throughout his time here and are excited to see his best football over the next several seasons.”

Yes, the Browns do believe Njoku can become an even better player and substantially build upon his 148 career receptions for 1,754 yards and 15 touchdowns since the Browns drafted him with the 29th overall pick in 2017. He had his best season since 2018 last year with 36 catches for 475 yards and four touchdowns, matching his career high from 2017 and 2018.

Now, he’s locked in as the Browns’ top tight end and could be in for his best year yet with three-time Pro Bowl QB Deshaun Watson under center for the Browns. Watson, who will be in Cleveland through 2026, has a 67.8 completion percentage and is the most accurate passer in NFL history with a minimum 1,500 pass attempts, and it’s a safe bet Njoku will be the recipient of a large chunk of the targets Watson is set to throw in a Browns uniform.

The best part for Njoku, though, is he’ll have the chance to finish building what he started with the Browns.

Njoku, DE Myles Garrett, OG Joel Bitonio and LS Charley Hughlett are the longest-tenured players with the Browns and only players left from Cleveland’s winless season in 2017. Frustrations, letdowns and adversity have been a part of Njoku’s growth in the league, but the last two years — where the Browns have collected their most wins in a two-year stretch since 1988-89 — have given him and other Browns players a breath of fresh air.

It’s also made them realize how special Cleveland is when the Browns are winning football games. Njoku saw it happen in 2020, when the Browns ended their 18-year playoff drought and every player on the team was embraced to the core in the city.

He wants to build another season like that again, only with a different ending.

“There is no question that we have unfinished business,” he said. “These are exciting times. It’s a lot of blood, sweat and tears that was put into these last few years. I owe it all to God. We just have to keep working. I’m just going to go back to the drawing board, figure out what I have to perfect and what I have to do right or what I can do better and get back to work.”