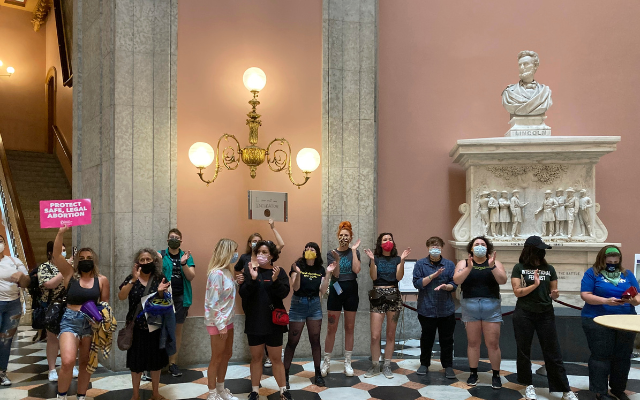 Abortion rights protesters rally in the Rotunda of the Ohio Statehouse on Tuesday, Sept. 28, 2021, in Columbus, Ohio. The protest came a day before the Senate Health Committee was scheduled to hear a bill that would ban abortions in Ohio in the event of a U.S. Supreme Court decision overturning the Roe v. Wade decision. (AP Photo/Andrew Welsh-Huggins)

COLUMBUS, Ohio (News Talk 1480 WHBC) – An abortion after six weeks of pregnancy has quickly been outlawed in Ohio.

An injunction placed on the Heartbeat Bill in 2019 was lifted by a federal judge Friday evening, making it immediately a state law.

That was made possible when the U.S. Supreme Court overturned the Roe vs Wade decision earlier Friday.

It gives states the determination over whether abortion is a right, or not.

Under the Heartbeat Bill, an abortion cannot be performed after a beating heart is detected, usually six weeks in.

The focus of the legal consequences are the doctors and caregivers, not the patient.

Opponents say there are still legal options they can pursue.