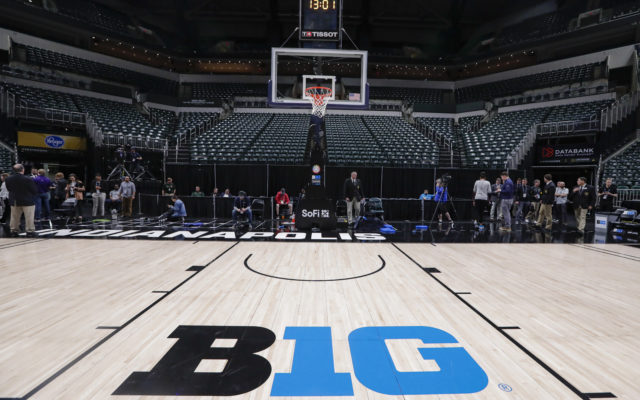 The seating area at Bankers Life Fieldhouse is empty as media and staff mill about, Thursday, March 12, 2020, in Indianapolis, after the Big Ten Conference announced that remainder of the men's NCAA college basketball games tournament was cancelled. (AP Photo/Michael Conroy)

We still aren’t sure how much the next  round of stimulus checks might be, but Ally Bank is. The financial institution is offering $250 in a savings account to all babies born on December 31st.

Construction fences are set to come down tomorrow at Canton’s Centennial plaza downtown. The more than $12million project celebrates the 100th anniversary of the founding of the NFL. Originally planned to open this past September. Once things are safe to gather again, officials say they plan on events like concerts and movie nights.

Plan B. – The Browns can still reach the playoffs this weekend even if they lose or tie  the Steelers. An Indianapolis loss to Jacksonville would assure the Browns of their first NFL playoff appearance in 17 years.

A Las Vegas slots player got really lucky on Christmas Eve. A guy known only as Kevin spent $40 in a slots machine at the Suncoast Hotel and Casino. And just after noon on December 24th, he hit it big, winning the $15.5-million jackpot.

We told you yesterday that Kevin Love is covering workers lost wages at Rocket Mortgage Field house for games not played during the pandemic. He already donated $100,000 in March to support staff. The 3-0 Cavs are back in action tonight to take on the Knicks at the Rock. Pre-game tonight 6:30 on News-Talk 1480, Tip off & play by play with our man Tim Alcorn and Jim Chones is at 7.

The Mega Millions drawing tonight is up to $376million get out there and play. The Powerball is up to $360million as well.

Paul’s response to the idea of the fight, “Nah, I wouldn’t fight her,” Waste of time. No one knows who she is.” Said the Youtuber that no one’s heard of.

1937 – Babe Ruth returned to baseball as the new manager of the Class D, DeLand Reds of the Florida State League. Ruth had retired from baseball in 1935.

2007 – The New England Patriots became the first NFL team in 35 years to finish the regular season undefeated (16-0) when they beat the New York Giants 38-35. Last night, they lost 38-9 to Buffalo making them 6-9 on the season and with one game remaining marking the first losing season since 2000 when they went 5-11.

Ted Danson is 73, Sam Malone “Cheers”, himself “Curb your enthusiasm”

Side note, he yelled at my brother for taking a picture of Reggie Bush in the tunnel before the Hall of Fame Game