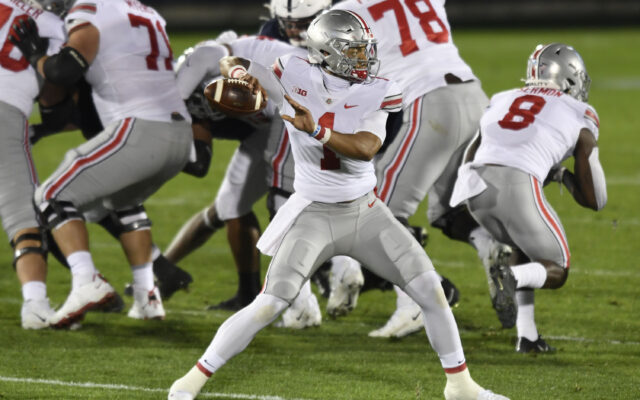 Despite 5 starters being out, 23 total players inactive to possible Covid-19 related issues and head coach Ryan Day missing the game because he’s recovering from the Coronavirus, Ohio State got its game in with Michigan State on Saturday in East Lansing and came away with an impressive 52-12 victory over the Spartans.

Quarterback Justin Fields threw for 2 scores and ran for 2 others while pilling up over 300 yards of total offense in the win.

Running back Trey Sermon ran for a team high 112 yards and 1 td in his best game of the season.

Wide receiver Chris Olave caught 10 passes for a game high 139 yards and 1 score, while fellow wide out Garrett Wilson grabbed 3 passes from Fields for 59 yards and a touchdown.

Defensive lineman Haskell Garrett led the defense that created 3 turnovers with a “Pick 6” in the second half.

The #4 ranked Buckeyes improved to (5-0) on the year and hope to host their rival Michigan Saturday, December 12th if the Wolverines are cleared to play after sitting out this week’s game because of Covid-19 issues. If the game is played, as of now, it will be a 12pm kick off in Columbus and you’ll be able to listen to it on News-Talk 1480 WHBC.