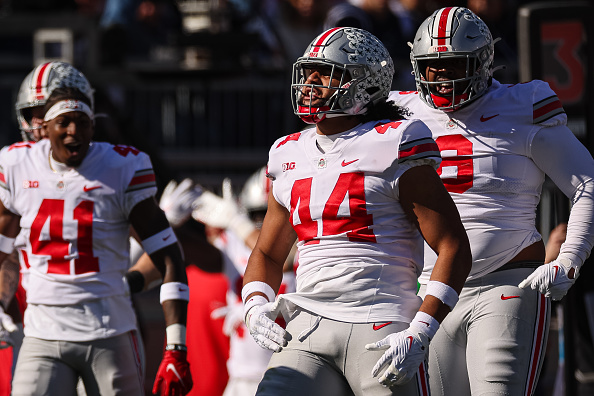 STATE COLLEGE, PA - OCTOBER 29: J.T. Tuimoloau #44 of the Ohio State Buckeyes celebrates after intercepting a pass against the Penn State Nittany Lions during the first half at Beaver Stadium on October 29, 2022 in State College, Pennsylvania. (Photo by Scott Taetsch/Getty Images)

Two OSU players stood out in the win:

On offense, WR- Marvin Harrison made catch after catch to lead the Buckeyes, finishing with 10 grabs for 185 yards.

On defense,  DE- J.T. Tuimoloau was a one man wrecking crew finishing with 6 tackles, 3 tackles for loss, 2 sacks, 2 interceptions(1 for a Pick 6), 1 forced fumble and 1 fumble recovery.

In all, the Ohio State defense forced 4 Penn State turnovers.

QB- C.J. Stroud came alive late in the game and finished with 354 yards and 1 touchdown to TE- Cade Stover.

After a slow start, RB- TreVeon Henderson reached the endzone twice and rushed for 78 yards on 16 carries.

Next up for the #2 ranked Buckeyes, a road game at Northwestern on November 5th.