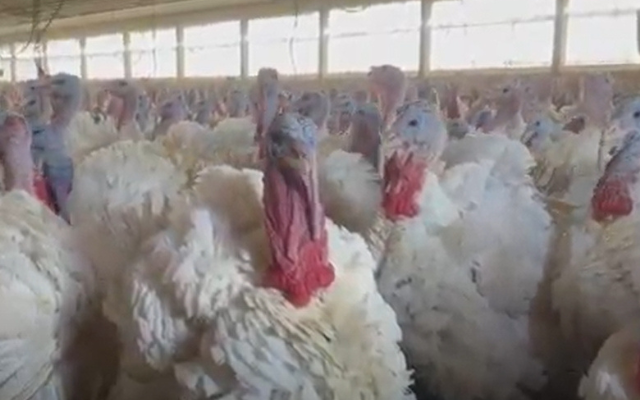 By now we have all heard that Thanksgiving dinner, according to American Farm Bureau, is going to cost consumers about 20% more than it did just a year ago for a number of different reasons, including inflation. Turkey producers, the farmers that work hard to put that centerpiece on the table are feeling the pinch of inflation as well.

“A lot of it has come to play with the rising cost of inputs, the electric, fuel, parts, also the cost of feed, the cost of employment for everyone involved,” said Ohio Farm Bureau member Curt Menchhofer, who farms with his brother, Eric, in west central Ohio.

The turkey alone is about 21% more expensive than 2021, but turkey farmers like the Menchhofers aren’t seeing an increase in their bottom at the farm level.

“No, not necessarily,” Curt said. “There, again, due to our rising input cost, it’s costing more to produce that same turkey on our own, let alone our contractors and with feed costs and employment costs.”
While the rising operation costs have hampered turkey farmers in 2022, there has been one other major challenge across the country.

High Pathogenic Avian Influenza has accounted for 7 and a half million turkeys to be taken out of population and the threat of the disease spreading lasted longer this year than in typical years. There are many measures in place on the farm to protect the flock from HPAI

“At this point, biosecurity has been our biggest precaution in making sure we keep the outside out, the inside in, and we do all of our own service work as long as we’re able to,” Eric Menchhofer said. “That way, we don’t have to worry about other people potentially dragging in the disease. The biggest thing there is just trying to do all of our own work.”

News of HPAI and the other factors weighing down the poultry industry has many consumers concerned about the availability and safety of this year’s turkey supply. Thanks to America’s resilient turkey farmers and overall food system, neither of those concerns will be an issue this Thanksgiving.

“There’s plenty of Turkey out there to be had and we’re working as hard as we can to produce more when we can,” Eric said. “And by all means, it’s absolutely safe to eat.”

Consumers can also thank farmers like the Menchhofer brothers for their environmental efforts as well, something they take as much pride in as producing turkeys.

“As far as sustainability, we use a lot of the manure fertilizer so we don’t have to purchase commercial fertilizers,” Eric said. “On the environmental side we are putting up a manure storage facility to keep our manure and our bedding under roof and out of the environment.”

According to a new survey from American Farm Bureau, Thanksgiving will cost just over $64 for a family of 10. Even though that data is $10 higher than a year ago, you’d be hard pressed to find a feast like many of us will enjoy for under $6.50 a person. Thanks to America’s farmers, that is something we can all be thankful for.