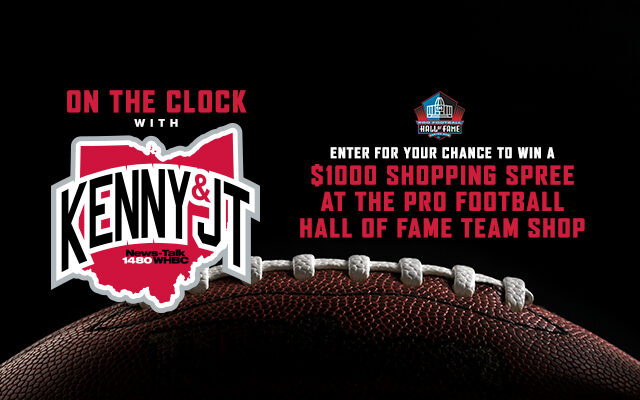 NO PURCHASE NECESSARY TO ENTER OR WIN.  A PURCHASE WILL NOT INCREASE YOUR CHANCES OF WINNING.

These contest-specific rules should be read in conjunction with Alpha Media’s General Contest Rules, which are applicable to all contests conducted by Alpha Media Holdings LLC and/or its subsidiaries (including licensee subsidiaries).

Participants can win a prize on any of one of the days of April 19th through April 29th (not including the weekend) and still be eligible for the grand prize of a $1000 Hall of Fame Gift Shop Gift Card.  The prize is not to be given as cash but as a gift card from said sponsor.

Participants will listen for their name at 4:20pm on the Kenny and JT Show.  They will have 10 minutes from the announced time to call 330-450-1480 and claim the prize.  The time will be managed by the producer of the Kenny and JT show and is based on “real listening” on air.  Any delays of listening via the radio station’s stream or other apps do not change the time of participants’ required call.   If the participant’s name is called but they do not respond in time their name will be placed back into rotation for drawing another time and the producer will move on to draw another winner.  Daily drawings will continue until a winner is found.

Participants must sign all contest release and waiver forms before accepting the prize.

VIA INTERNET –Go to www.whbc.com and follow the links and instructions to enter and submit the required information, which may include your first and last name, address, telephone number, date of birth, and a valid email address, in the online entry form.  Internet entries will be deemed made by the authorized account holder of the email address submitted at the time of entry.  The authorized account holder is the natural person who is assigned to the email address by an internet access provider, online service provider or other organization that is responsible for assigning the email address or the domain associated with the submitted email address.  Multiple entrants are not permitted to share the same email address.  Entries submitted will not be acknowledged or returned.  Use of any device to automate entry is prohibited.  Proof of submission of an entry shall not be deemed proof of receipt by Station. The Promotion administrator’s computer is the official time-keeping device for the Promotion.

VIA TELEPHONE – At the time of their call entrants must provide all requested information, including their first and last name, complete postal address (street, city, state, and zip code), email address, telephone number, and date of birth.  Use of any device to automate entry is prohibited.  Proof of submission of an entry shall not be deemed proof of receipt by Station.  The Promotion administrator’s telephone system is the official time keeping device for the Promotion.

Odds of winning depend upon the number of entries received as applicable.

Decisions of Station management with respect to the Promotion are final.

Winners are notified each day at 4:20pm Monday through Friday during the contest period on the Kenny and JT Show.  They may only claim their prize if they call in to the show on 330-450-1480 in the allotted time.  At that time they will provide proof of entry and identity and will be declared the winner.

iii.          represent and warrant that: you are at least as old as the age of majority in your state; you have the full legal right, power and authority to grant to Alpha the license provided for herein; you own or control the complete exhibition and other rights to the Materials you submitted for the purposes contemplated in this license; you are either the parent (or legal guardian) of any minor featured in the Materials or have received the express consent of the parent (or legal guardian) for any such minor to appear in the Materials and to enter the minor’s likeness in the Materials in the contest; and neither the Materials nor the exercise of the rights granted herein shall infringe upon or violate the right of privacy or right of publicity of, or constitute a libel or slander against, or violate any common law or any other right of, any person or entity.