OSU Holds On To Beat Indiana 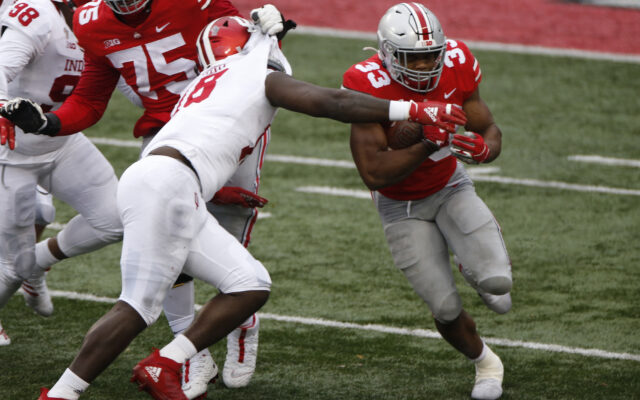 The Ohio State Buckeyes held on to defeat Indiana 42-35 in Columbus to remain undefeated on the year at (4-0).

OSU led 28 to 7 at the half and increased that lead to 35 to 7 in the third quarter, but were outscored from that point by the Hoosiers 28 to 7. But time ran out on Indiana.

Quarterback Justin Fields had an up-and-down day for Ohio State throwing for 300 yards and 2 touchdowns, but he was intercepted 3 times, his first 3 picks of the season. Fields also rushed for 78 yards and one score.

Master Teague lead the way on the ground for the Buckeyes, rushing for 169 yards in 2 touchdowns.

Wide receivers Chris Olave and Garrett Wilson both eclipsed the century mark. Wilson with 7 grabs for 169 yards and 2 touchdowns, while Olave caught 8 balls for 101 yards.

Indiana quarterback Michael Penix threw for 491 yards and 5 touchdowns and 1 interception. That 1 interception though was costly, as it was a “Pick 6” by Ohio State defensive back Shaun Wade.

With the win the Buckeyes remained in first place in the Big Ten East division, while Indiana fell to (4-1) on the year and in second place.

Next up for Ohio State a road game next Saturday at Illinois.