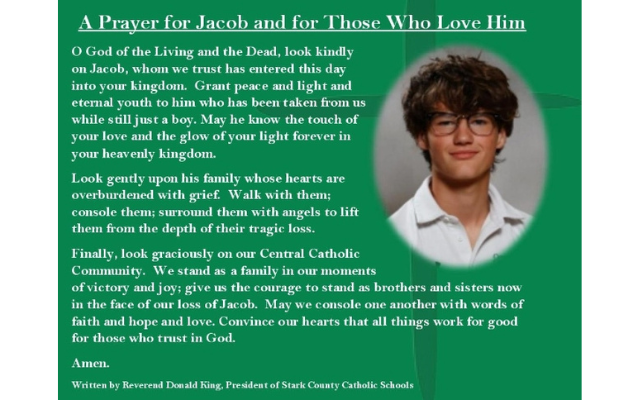 PERRY TWP., Ohio (News Talk 1480 WHBC) – It’s rivalry week at a lot of area high schools, but it’s taken on a much different tone at Central Catholic this week.

This, as the students and staff learned about the traffic death of a junior student over the weekend.

Jacob Brown was killed Sunday night in a one-vehicle crash on Route 24 in Maumee near Toledo, according to Maumee police.

Brown was a member of the school’s soccer team, which asked that Monday night’s sectional tournament game be moved to Tuesday night.

A number of other school events have been delayed or canceled, like the “Beat Aquinas” bonfire and pep rally.

Students asked that a prayer service replace the rally, according to the school.

And the school says Brown will be remembered before the start of the football game Thursday night.

Counselors, the campus minister and others are available again Tuesday at Central Catholic.