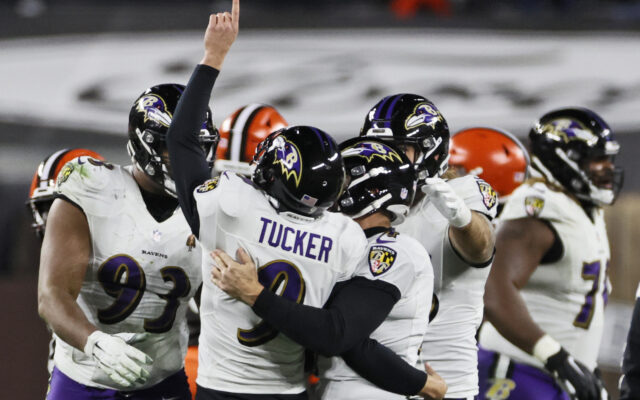 Baltimore Ravens kicker Justin Tucker (9) celebrates with teammates after kicking a 55-yard field goal during the second half of an NFL football game against the Cleveland Browns, Monday, Dec. 14, 2020, in Cleveland. The Ravens won 47-42. (AP Photo/Ron Schwane)

Justin Tucker’s 55 yard field goal with :02 left and a safety on the games final play lifted the Ravens to a 47-42 win over the Browns in Cleveland on Monday Night Football.

Tucker’s field goal came after Browns quarterback Baker Mayfield rallied Cleveland from a 42-35 deficit with under two minutes to play to tie the game at 42-42. But the Browns defense could not contain Lamar Jackson in the final minute, and last year’s NFL MVP, who missed some of the game with cramps, returned in time to lead his team to victory.

Lamar Jackson ran for 124 yards and 2 touchdowns and threw for another 163 yards and a score without a turnover.

Baltimore improves to (8-5) on the season.

Next up for Cleveland another “Prime Time” night game, Sunday on the road against the Giants.