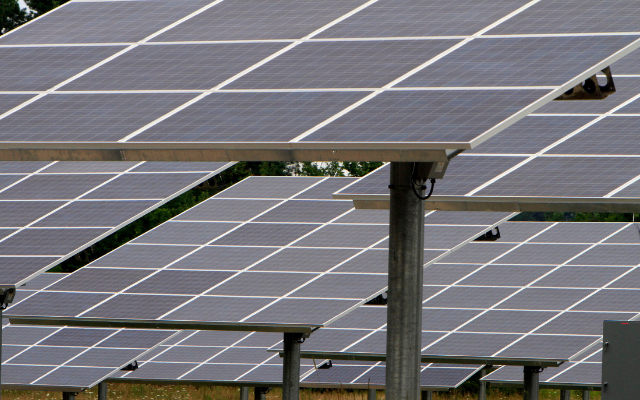 Solar trackers are seen in South Burlington, Vt., on Wednesday, July 27, 2011. The project, 382 solar trackers composed of more than 9,000 individual panels, makes up Vermont's largest solar installation which was commissioned Wednesday. The 2.2 MW solar farm uses the Vermont-made AllSun Tracker ñ pole-mounted solar energy systems that use GPS and wireless technology to orient with the sun throughout the day to produce more energy than fixed solar units. (AP Photo/Toby Talbot)

WASHINGTON TWP., Ohio (News Talk 1480 WHBC) – A Canadian subsidiary of Samsung is in talks with the Stark County Regional Planning Commission and a handful of property owners in Washington Township.

They hope to construct a solar energy farm.

Samsung Renewable Energy is looking at 800 acres in the township, roughly bounded by Cenfield Street, Route 153, and Lynnhaven and Hartzell Avenues NE.

They hope to be operational by the spring of 2024, feeding electricity into the grid.

They may file their plan before October 11th when a new state law takes effect.

Construction could start next spring.