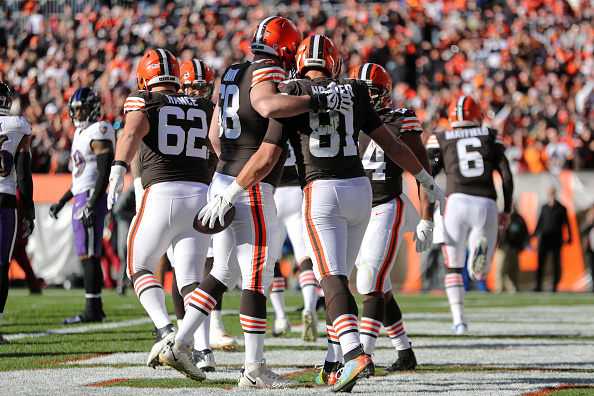 The Browns survived and their playoff hopes are still alive!

Cleveland jumped out to a 24-3 second quarter lead and held on to defeat Baltimore at First Energy Stadium 24-22.

After trailing 24 to 6 at halftime Baltimore, with back up quarterback Tyler Huntley in the game, outscored the Browns 16-0 in the second half and  had achance to win the game.

After a successful onside kick the Ravens had the ball with a chance to win late in the fourth quarter, but cornerback Denzel Ward came up with a game saving tackle on fourth down near midfield and the Browns ran out the clock to secure the victory.

Baker Mayfield threw for 190 yards and 2 touchdowns, 1 each to Jarvis Landry and Austin Hooper.

Myles Garrett scored the Browns other touchdown as he had a strip sack and the returned the fumble for his first career NFL touchdown.

In doing so, Garrett also set the Browns season sack record with 15 and he still has four games left to play.

With the win, the Browns improved to (7-6) on the season.

With the loss, the first place Ravens fell to (8-5) and also lost quarterback Lamar Jackson, who left the game in the first half, with an ankle injury.

The standings in the AFC North after 13 weeks:

Next up for the Browns, a Saturday home game against the Las Vegas Raiders at 4:30 PM.