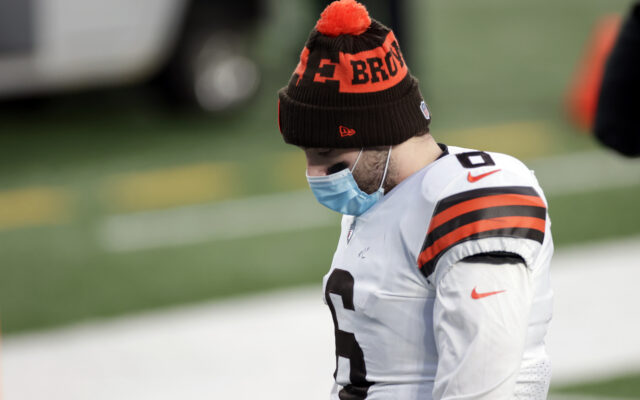 Minus five starters on offense and two on defense, the Browns couldn’t overcome those absences and their in-game mistakes and lost in New Jersey to the Jets 23-16.

Baker Mayfield fumbled 3 times, losing 2 of them, Cody Parkey missed an extra point and the Browns had communication breakdowns on defense that contributed to the 7 point loss and kept Kevin Stefanski’s squad from clinching a playoff spot.

However, the Browns, (10-5) on the year, do control their own destiny. All the Browns have to do to clinch a playoff spot for the first time since 2002 is beat the Steelers in Cleveland on Sunday. So a win and their in. Also the Browns qualify for the playoffs if the Colts lose.

The Browns will wait to see how many of the players they will get back from the Reserve Covid list and injuries for next week. Sunday against the Jets they were without Jarvis Landry, “Hollywood” Higgins, KhaDarel Hodge, Jedrick Wills, Wyatt Teller, B.J. Goodson, Ronnie Harrison and Jacob Phillips.

While Nick Chubb did score a touchdown on his 25th birthday, he was held to just 28 yards on 11 carries. Kareem Hunt scored the Browns other touchdown.

Besides what Browns players return for next week’s game, the other storyline will be which players will actually play for Pittsburgh now that they’ve clinched the AFC North by rallying from 24-7 down in the 3rd quarter to beat the Colts 28-24 Sunday.  The Steelers at (12-3) could rest some players if seeding doesn’t matter to them, or if it is already determined by then.