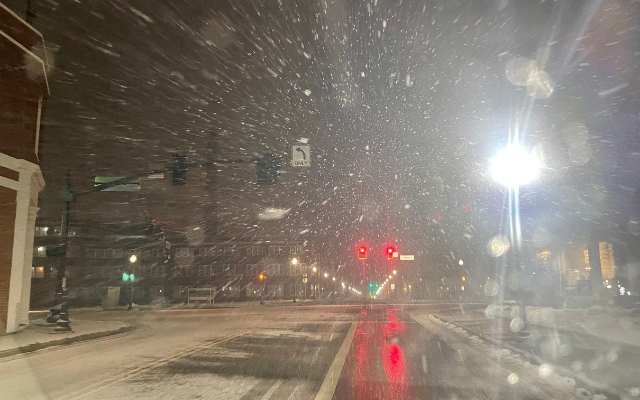 And an advisory is in effect until 3 p.m. for Stark, Summit, Portage, Wayne and most other northeast Ohio counties.

AccuWeather still calls for the snow and sleet to change to all rain.

The snowfall in the Canton area began falling around 3:45 a.m.

At 7 a.m. it was still falling heaviest south, west and east of Canton.

The temperature this afternoon will reach 44, melting a lot of what we get.

And Route 30 just west of the city limits to Paris Ave., according to the fire chief.

We don’t get much of a break either, with another 1 to 2 inches forecast for Thursday.
Snow Parking Bans

Snow parking bans up so far for Massillon, and Perry, Jackson, Plain, Lake and Nimishillen Townships.

Don’t forget to check often with 1480 WHBC radio at 1480 on the AM dial for the latest, with cancellations and other community changes on our Alerts Center page.

Most if not all K-12 school districts called off on Wednesday.