Sources: Polamalu will make it to HOF Enshrinement Saturday 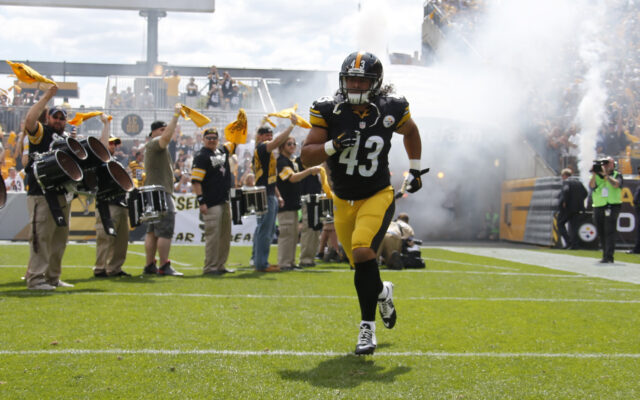 FILE - In this Sept. 7, 2014, file photo, Pittsburgh Steelers strong safety Troy Polamalu (43) takes the field during introductions for an NFL football game against the Cleveland Browns in Pittsburgh. Polamalu's iconic football career is over. The eight-time Pro Bowl safety told the Uniontown Herald-Standard he informed Steelers chairman Dan Rooney on Thursday night, April 9, 2015, he will retire rather than return for a 13th season. (AP Photo/Gene Puskar, File)

It looks as though Troy Polamalu will make it to Canton for his enshrinement Saturday night  He had tested positive for Covid 19 and we were told by the Hall of Fame earlier this week that if he made it through his quarantine Friday without any issues he could fly out and make it to Canton for Saturday night’s event.  That is exactly what he will do according to sources who told Steeler Reporter Dale Lolley with DKPittsburgh Sports.

Polamalu will be inducted into the hall with the 2020 Centennial Class that includes his Coach Bill Cowher and fellow Steeler Donnie Shell.

Polamalu, elected in his first year of eligibility, played 12 season (2003-2014) with the Pittsburgh Steelers. He was an eight-time Pro Bowl selection, four-time All-Pro and won two Super Bowl rings (XL, XLIII). He was the 2010 AP Defensive Player of the Year and selected to the NFL’s All-Decade Team of the 2000s.