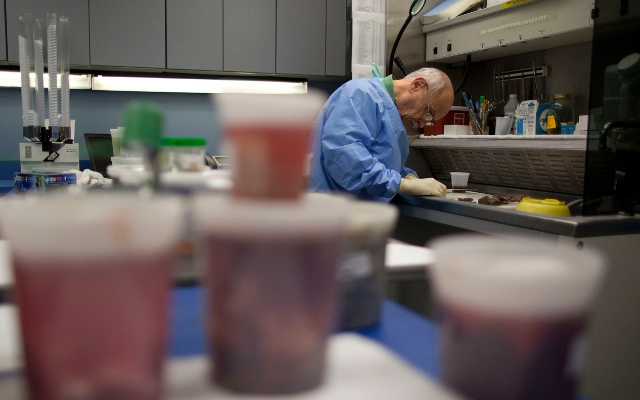 Medical examiner Dr. Timothy Dutra prepares tissue samples from a corpse for viewing under a microscope to help determine the cause of death, Thursday, Sept. 29, 2011, at the Clark County Coroner's office in Las Vegas. (AP Photo/Julie Jacobson)

CANTON TWP., Ohio (News talk 1480 WHBC) – The Stark County Coroner’s Office was set to move into a new, larger facility by the first of the year.

That new location is in a county-owned building in the 3000 block of Cleveland Avenue SW in Canton Township.

But it’s being delayed at least another month or two due to supply issues.

The building has been renovated to suit the work of the office, but they’re still waiting for a generator and a gas meter, at last check.

Conditions are cramped in the current facility at the sheriff’s office complex on Route 62 in Canton.

Family members must sometimes walk past bodies to meet with the coroner.

At the current facility off Route 62 in Canton, they’ve had to bring in a second refrigerated unit to store bodies.