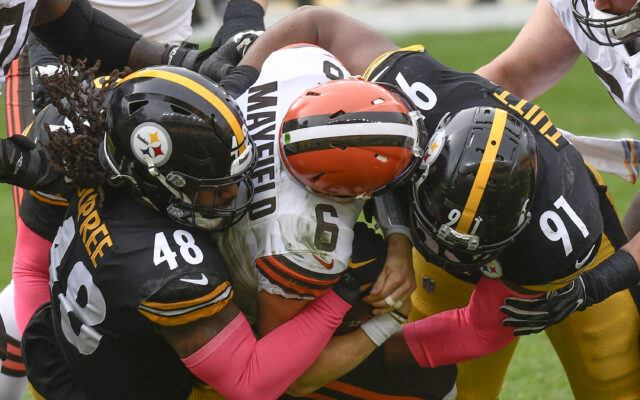 Make it now 17 straight seasons that the Browns have lost in Pittsburgh. The Steelers used a swarming, hard hitting defense and an efficient, ball control offense to out play, out hit and out score the Browns 38-7 Sunday in the “Steel City”.

You could say this game was decided in the first two drives of the game. The Steelers took the opening kickoff and marched 58 yards in 4:25 seconds and scored on a Chris Boswell 35 yard field goal for a 3-0 lead.

Then on the Browns first possession of the game, Baker Mayfield was picked off by Pittsburgh safety Minkah Fitzpatrick who returned the interception for a “Pick 6” and a 10-0 Steelers lead just over 6 minutes into the game and it was an uphill battle from that point on for the Browns and they never did come close to getting back in the game.

Mayfield, playing with sore ribs, and he looked like it,  was pounded and battered all day and eventually was taken out of the game by head coach Kevin Stefanski and replaced by Case Keenum late in the 3rd quarter. Mayfield finished the game 10-18-119 yards with 1 touchdown and 2 interceptions. He was sacked 4 times and hit at least another dozen times in the game before leaving.

As a team, the Browns came in as the NFL’s top rushing team, averaging 188 yards per game, but could only muster 75 yards on the ground against the Steelers.  Kareem Hunt was the top ball carrier with 40 yards.

Austin Hooper led the Browns in receiving with 52 yards on 5 catches. “Hollywood” Higgins scored the Browns only touchdown of the game on his only catch for 13 yards. Jarvis Landry grabbed 3 balls for 40 yards and Odell Beckham Jr. caught 2 for 24 yards.

As a team the Browns totaled only 220 yards.

Ben Rothlisberger had an average day for him, but the key to his game is he did not turn the ball over. “Big Ben’s” stat line:14-22-162yards-1td-0int.

Rookie wide out Chase Claypool had a big game with 1 td run and 4 catches for 74 yards.

The Steelers are (5-0) for the first time since 1978 and all alone in first place in the AFC North, a half game better than Baltimore.