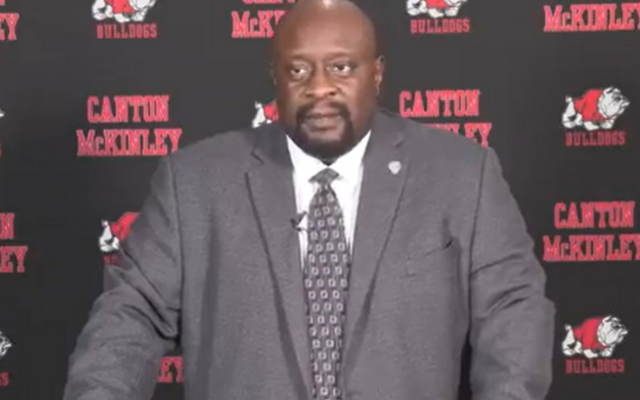 Talbert provided little additional detail on the May 24 McKinley pizza-eating incident, but in the video, he calls the actions by the seven coaches released by the district as “extraordinarily inappropriate”.

The coaches including Head Coach Marcus Wattley were accused of forcing a player against his religion to eat pizza with pork on it.

The following is a statement from Superintendent Talbert regarding the Canton City School District and its recent incident with the football program.

We understand recent events have brought attention to our school and our community. We, as a district, have remained open and honest about our role in these events, and about our desire to maintain the priority of every student’s safety and well-being.

False and inaccurate information has been purposely provided to news sources regarding the school district’s actions in recent days – these false accusations go against the very fabric of who we are as an institution of learning that is dedicated to student achievement and success.

At Canton City Schools, we believe in honesty, integrity, and transparency. In the spirit of cooperation, we would like to set the record straight on how events truly transpired so as to protect certain parties who now unwittingly find themselves in the middle of a story they themselves did not create.

Here are the facts:

• On May 24, troubling actions of our former football coaching staff came to the attention of our district administration.

• On May 25, an investigation into these troubling allegations began. At this time, to provide student safety, coaches were placed on suspension, barred from returning to campus, while the investigation occurred.

• As part of the investigation, the district spoke with the involved coaches who are on staff.

• As part of the investigation, the district viewed security video footage of the incident. This video footage is extensive and it clearly shows the identified coaches engaging in actions that constituted inappropriate, demeaning, and divisive behavior in a misguided attempt to instill discipline in the student-athletes.

• The investigation satisfied the reporting requirements established by the State of Ohio including the submission of appropriate materials to the Ohio Department of Education’s Office of Professional Conduct for their review. Also, in an effort to be comprehensive, and with our student’s wellbeing in mind, a police report was filed by the district.

With the student’s safety as our primary objective, the investigation was proper, timely, and appropriate, meeting the requirements established by the State of Ohio.

• The investigation established that the behavior of the then-coaching staff constituted inappropriate, demeaning, and divisive behavior and it was unbecoming of the teaching profession. Their actions demonstrated extraordinarily poor judgement.

• This investigation substantiated that based upon their extraordinarily inappropriate actions, the seven members of the coaching staff, including the head coach, would no longer be coaches with the Canton City School District.

Let us be clear, the Canton City School District holds our coaching and general staff to the highest professional and ethical standards. Anything short of these standards is unacceptable and will not be tolerated.

Although this has been a difficult situation, this incident does not reflect the Canton City School District’s culture of protecting the physical and emotional wellbeing of our students. We have a culture that is committed to excellence for our students and staff.

As we move forward, we are dedicated to delivering on that commitment.