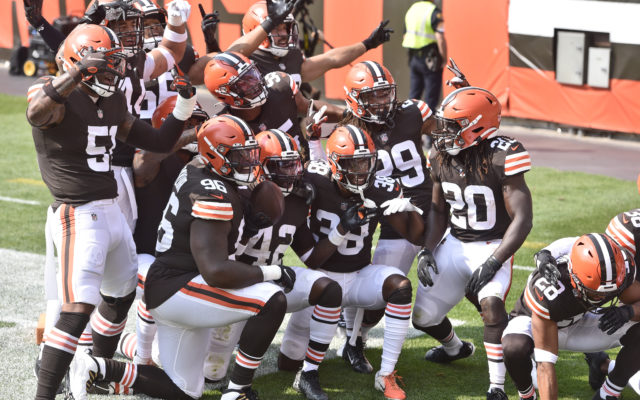 Cleveland Browns celebrate an interception by Karl Joseph during the first half of an NFL football game against the Washington Football Team, Sunday, Sept. 27, 2020, in Cleveland. (AP Photo/David Richard)

The Browns defense forced 5 Washington turnovers, Nick Chubb ran for 2 scores and Baker Mayfield threw for 2 others in a 34-20 victory over the Washington Football Team.

Chubb paced the offense rushing for 108 yards and those 2 touchdowns. The Browns as a team ran for 158 yards.

Mayfield, who did not turn the ball over, was 16-23-156 yards. His 2 td passes went to Kareen Hunt and rookie tight end, Harrison Bryant, his 1st career td.

Cody Parkey was perfect on the day on special teams nailing all 4 extra points and splitting the uprights on 2 field goals from 42 and 30 yards.

Next up for Kevin Stefanski’s squad, a road game against the Cowboys in Dallas next Sunday.