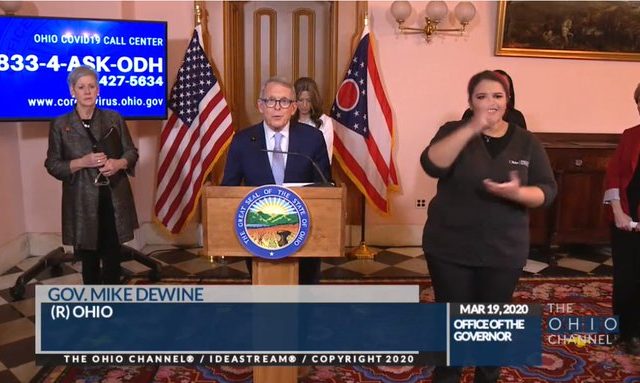 COLUMBUS (News Talk 1480 WHBC) – Once again, Governor Mike DeWine along with other state leaders and health officials spoke this afternoon in Columbus to provide an update on COVID-19 in Ohio. Below is a complete outline of everything that was discussed.

The Ohio Department of Health (ODH) has reported that two more people have died from COVID-19 in the Buckeye State, bringing the state’s total number up to eight. Counties that have a confirmed death include Cuyahoga (2), Erie (1), Franklin (2), Gallia (1), Lucas (1) and Stark (1).

Stark County has 13 confirmed cases of the coronavirus. According to the ODH’s latest numbers, Stark’s death total of one did not increase.

People and the Economy

Governor DeWine opened his press conference expressing his awareness of the public’s concern over the economy.

“Every single day I think about those of you who are unemployed,” DeWine said. “I think about the small businesses. I know that each day that goes by that you don’t have income is very, very tough. And I fully understand that.”

The Governor spoke about the statements made yesterday by President Trump, saying that he share’s the President’s frustration with the entire situation. However, DeWine says that the main goal is keeping people alive.

“The truth is that protecting people and protecting the economy are not mutually exclusive,” said DeWine. “In fact, one depends on the other. We save our economy by first saving lives. And we have to do it in that order.”

Despite many businesses being closed, the financial services are open. Lt. Governor Jon Husted says their lobby may not be open, but they have ATMs and drive-thrus, online services.

Banks, credit unions encourage business owners experiencing difficulties to call them. Lt. Governor Husted says they will work with you and want to help you through this difficult period. Business owners can get more information here.

The state is at about 60% capacity in hospitals after elective surgeries stopping. Dr. Amy Action with the ODH says the bottom line is that it’s about ICU bed capacity.
She says Ohio is trying to keep those who can be routinely cared for in lesser care settings and turning our hospitals into expanded ICU settings.
Ohio plans to see a shortage of beds and hospital facilities that other states are currently experiencing. Dr. Acton says the state is looking at using hotels and dorm rooms to care for patients when hospital rooms begin to run out.
Dr. Acton added that all of the Personal Protective Equipment (PPE) that the state has has been put out into the field.
She says that the state has a limited supply and they have placed the PPE where it is needed the most. Health officials are working to determine how to extend the use of PPE.
Popular Posts