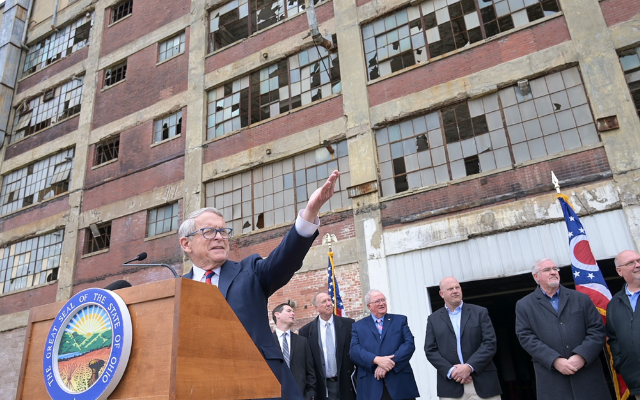 Governor Mike DeWine in front of the shuttered Westinghouse building in mansfield on April 26, 2022. The governor spoke about state tax credits for that and other projects. (Courtesy governor's office)

CANTON, Ohio (News Talk 1480 WHBC) – A couple of older downtown buildings including Canton’s first skyscraper are being reborn, thanks in part to state tax credits.

The Ohio Historic Preservation Tax Credit Program has awarded another $4.8 million in credits to the Renkert Building at Market Avenue N and 3rd Street.

The plan there is for a 92-room extended stay hotel.

And another $2 million in credits goes to the Folwell-Zollinger Building facing Second Street NW between Market and Court.

That is expected to be a 24-unit apartment building.

Downtown developer Steve Coon is involved in both projects.