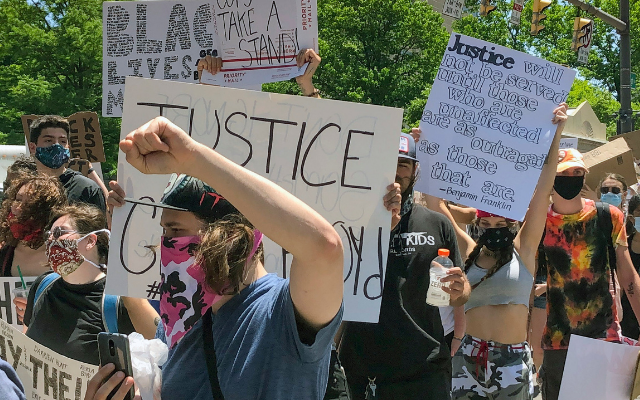 File – In this June 2, 2020 file photo, demonstrators march past the Ohio Statehouse in Columbus, Ohio, protesting the death of George Floyd, who died after being restrained by Minneapolis police officers on Memorial Day, May 25. Columbus Mayor Andrew Ginther announced Tuesday, June 16, 2020 that police will be prohibited from using tear gas and limited in using pepper to disperse peaceful protests and demonstrations in the city. (AP Photo/Andrew Welsh-Huggins, File)

COLUMBUS, Ohio (News Talk 1480 WHBC and ONNN) – One person was detained and a crowd of demonstrators was pepper-sprayed in Columbus Tuesday night when some of the 40 people involved in a peaceful protest at a city park marched to police headquarters and managed to break through a first set of double doors.

An officer was also hit with pepper spray.

The protestors were unhappy with the shooting death of a Black man by police inside a Westerville hospital.