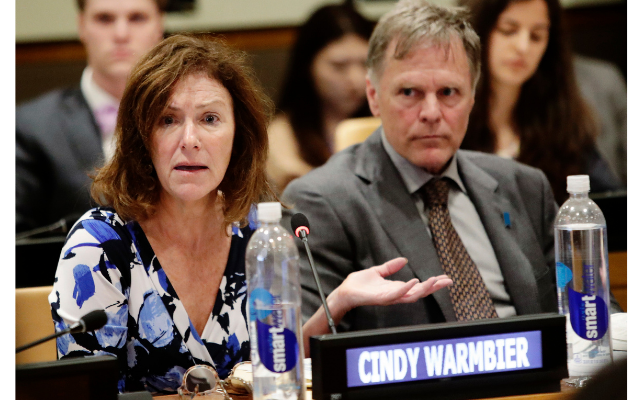 FILE- In this May 3, 2018 file photo, Fred Warmbier, right, listens as his wife Cindy Warmbier, speaks of their son Otto Warmbier, an American who died in 2017 days after his release from captivity in North Korea, during a meeting at the United Nations headquarters. The Warnbiers have filed a claim for the North Korean cargo ship seized in May 2019 by the United States in a bid to collect a $500 million judgment awarded in the American college student's death. (AP Photo/Frank Franklin II)

WYOMING, Ohio (News Talk 1480 WHBC and ONN) – A federal judge rules that the parents of Otto Warmbier should receive about $240,000 in compensation from the North Korean government.

It’s a partial payment of the $500 million awarded to Fred and Cindy Warmbier in 2018.

That partial payment was from money seized from a North Korean bank.

Their son Otto who was imprisoned in brutal conditions in 2016 after visiting North Korea was returned to the U.S. in critical condition.

He died a short time later.