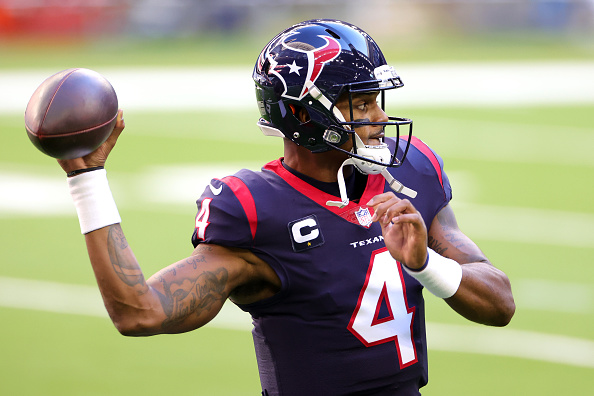 HOUSTON, TEXAS - JANUARY 03: Deshaun Watson #4 of the Houston Texans in action against the Tennessee Titans during a game at NRG Stadium on January 03, 2021 in Houston, Texas. (Photo by Carmen Mandato/Getty Images)

ESPN’s Adam Schefter and other NFL reporters and writers are reporting that Texans quarterback Deshaun Watson, who originally told the Browns that he would not waive his no trade clause to play in Cleveland, has changed his mind and wants to play for the Browns.

Schefter broke the news on social media and Watson seemed to confirm it on his Instagram account by posting a picture of himself in a#4 Browns jersey and saying “Letssss Goooo”!

Internet reports say the Browns will give Houston (3) first round picks, (1) third round pick and (1) fourth round pick in the trade.

Besides Watson, the Browns will reportedly will get (1) fifth round pick.

The Browns are also reportedly reworking Watson’s contract to guarantee him $230 million dollars over 5 years.

Watson, who is 26, still has 22 civil lawsuits against him for inappropriate conduct and alleged sexual assault during massages he received. He did not play last season.