Where Does Ohio State Go from Here? by Billy Beebe 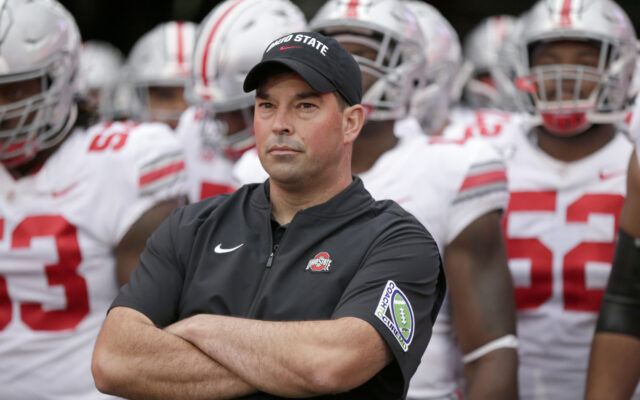 A packed Shoe, favored by two scores, early in a playoff hopeful season, and somehow Ohio  State found themselves in the loss column Saturday. Oregon upset the Buckeyes 35-28,  shining light on issues that needed just one close loss to be made major. As a loss puts Ohio  State at #9 in the newest AP Poll, here are some considerations going forward.

The Playoffs: Can Ohio State still make the College Football Playoff? That’s the question  flowing through fan’s heads. The answer is yes, but it will be difficult. Besides the obvious  idea of teams in front of Ohio State losing, it will come down to strength of schedule. In years  past when the Buckeyes have a loss in the regular season, they have multiple wins against  top 25 ranked opponents to help grab a playoff spot. The 2016 season is a prime example.  Ohio State suffers a mid-season loss to unranked Penn State. As the season finished, wins  against #14 Oklahoma, #8 Wisconsin, #9 Nebraska, and #3 Michigan bought them a Fiesta  Bowl Playoff matchup against Clemson. Looking forward Ohio State has 2 possible Top 25  opponents, #10 Penn State and whoever they face in the Big Ten Title. For a good playoff shot, the Buckeyes need to win every game and have teams such as Nebraska, Michigan,  and Michigan State find their way into the top 25.

The Defense: Kerry Combs is taking a lot of heat for Saturday’s loss. In his second year of  play calling, it’s clear creativity or imagination isn’t apart of the defensive game plan. Ohio  State stayed in same base defense all game and Oregon took advantage. The Buckeyes  clearly lack talent in both the secondary and linebacker group, which historically is solved by  teams pressuring the quarterback. Issue is, Ohio State isn’t getting after the quarterback. Zero sacks and zero turnovers is an unfortunate, but extremely telling stat line. Fans would  love to see more Jack Sawyer and J.T. Tuimoloau, but the upperclassmen still offer the best chance at winning. The game plan so far of “We’re Ohio State” hasn’t worked, defensive game planning will be busy going forward.

The Quarterback: C.J. was good Saturday. Three poor throws made it look as though  Stroud struggled. The 19 year old missed Olave late, Wilson to tie the game, and over threw  a ball for a game sealing interception. Fans were spoiled by Justin Fields, Stroud will need  time to get comfortable and play better football. Only a second loss would spark any serious  change at quarterback. The one thing time may not fix is the quarterback running, Every  Quarterback going back to Terrelle Pryor has made running apart of their game in the Ohio State offense. Stroud seems to only run when absolutely necessary. The offense and Stroud could benefit from the addition of more designed run plays that the young QB executes with  confidence.