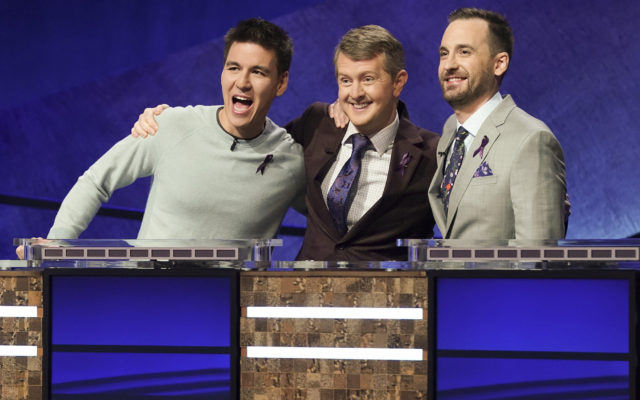 In this image released by ABC, contestants, from left, James Holzhauer, Ken Jennings and Brad Rutter appear on the set of "Jeopardy! The Greatest of All Time," in Los Angeles. The all-time top “Jeopardy!” money winners; Rutter, Jennings and Holzhauer, will compete in a rare prime-time edition of the TV quiz show which will air on consecutive nights beginning 8 p.m. EDT Tuesday. (Eric McCandless/ABC via AP)

“Jeopardy!” hasn’t named a successor for ALEX TREBEK, but KEN JENNINGS might have a shot at it.

“Jeopardy!” will resume production on November 30th, with guest hosts for the time being.  Ken is up first.  He said, quote, “There will only ever be one Alex Trebek, but I’m honored to be helping Jeopardy! out with this.”

Executive producer Mike Richards says, quote, “Alex believed in the importance of [the show] and always said that he wanted it to go on after him.  We’ll honor his legacy by continuing to produce the game he loved.”

The show will end 2020 by replaying some of Alex’s best episodes . . . and they’re airing his final week of episodes starting on January 4th.  The episodes that Ken will film next week will air later in January.