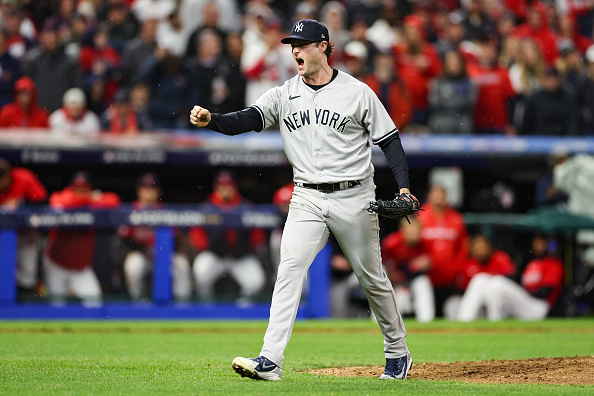 CLEVELAND, OHIO - OCTOBER 16: Gerrit Cole #45 of the New York Yankees reacts after a strikeout against the Cleveland Guardians during the seventh inning in game four of the American League Division Series at Progressive Field on October 16, 2022 in Cleveland, Ohio. (Photo by Christian Petersen/Getty Images)

Harrison Bader’s 2-run homer and Gerrit Cole’s mastery of the Guardians lifted the Yankees to a 4-2 victory over Cleveland in Game 4 of the ALDS to force a Game 5 Monday night in New York.

Bader’s blast in the third inning gave the Yanks a 3-0 lead and that was more than enough for Cole to work with as he went 7 innings and giving up just 2 runs in beating the Guardians for the second time this series, and for the fourth time this year.

Cal Quantrill lasted only 5 innings and took the loss, his second in the ALDS, both to Cole.

The only runs Terry Francona’s squad could muster, a Jose Ramirez rbi single in the third and a Josh Naylor solo homer in the fourth.

The decisive Game 5 in this series will be played Monday night in the Bronx.

Aaron Civale will start for Cleveland, while New York counters with Jameson Taillon. First pitch on News-Talk 1480 WHBC is set for 7:37pm.

The winner moves on to play the Astros in the best-of-seven ALCS starting Wednesday night in Houston.