Your Childhood Toy headed to the Hall of Fame? 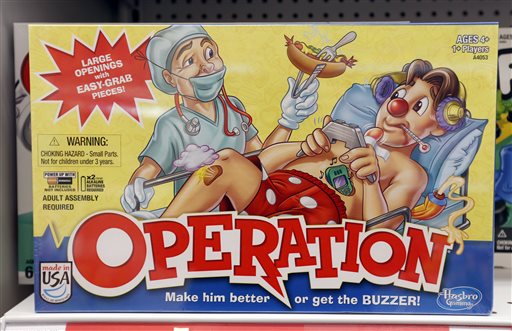 The game Operation is on display at a Toys R Us store on Monday, Sept. 22, 2014, in Colonie, N.Y. It is among the 12 finalists for induction this year into the National Toy Hall of Fame. (AP Photo/Mike Groll)

The winners will be voted on by toy industry experts . . . plus public voting at ToyHallOfFame.org for the next week.  Around three of the 12 toys will wind up getting inducted.  They’ll be announced on November 5th.

Last year the three toys that made it in were the coloring book, “Magic: The Gathering” cards, and Matchbox cars.

Four of the nominees this year were ones that didn’t make the cut last year:  Jenga, He-Man, My Little Pony, and Risk.

The Strong museum has revealed the 2020 National Toy Hall of Fame finalists! Which is your favorite? toyhalloffame.org