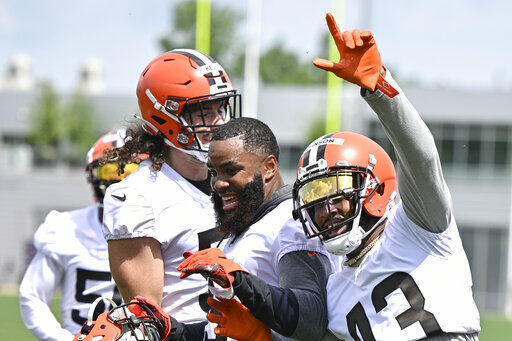 The Cleveland Browns will  visit the Pro Football Hall of Fame this Wednesday. Browns.com reported that Coach Kevin Stefanski announced Monday  the team will hold a practice at Tom Benson Hall of Fame Stadium and take a tour of the museum on the second day of minicamp. The trip comes in the middle of Mandatory OTA’s.

“It’s so vitally important that we understand what’s come before us as players and coaches (and learn about) the great teams that have come before us,” Stefanski said “We’re so fortunate to have the Pro Football Hall of Fame right down the road, so we’re going to take advantage.”

One name that may be missing on the trip is star defensive end Myles Garrett. At his special showing of the new Jurassic Park movie Friday night, Garrett told cleveland.com Browns reporter Dan Labbe that he doesn’t want to visit until his bust is in the Hall.

“I don’t know if I’ll go, I’ve kept myself from going until I have my face in it” Garret said “If we go as a team and Kevin says I want you to go then fair play, but I’m not trying to go until they have me in there for good.”