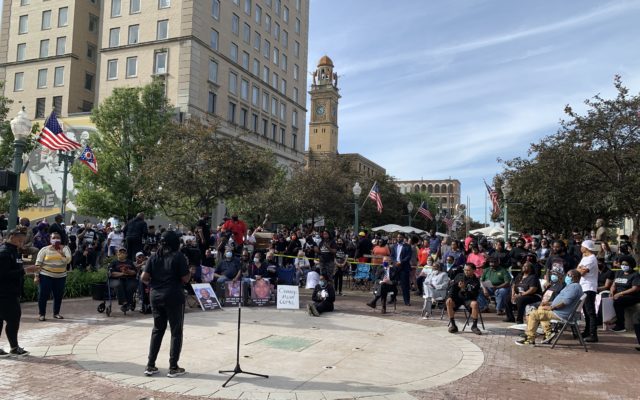 CANTON (News Talk 1480 WHBC) – On the one week anniversary of George Floyd’s murder, cities throughout the nation continued to gather in hopes to create change and end police brutality. For the fourth straight day, Canton played host to a peaceful protest.

Things started in downtown where the first sponsored protest took place at 5 PM. The Stark County Peace Rally for Justice was held in Central Plaza. The flyer for the event said it was sponsored by a coalition of African Americans.

Numerous members of the community, including politicians, healthcare workers, faith leaders, parents and children spoke at the rally. You can view the entire event below.

Following the Peace Rally, a majority of the group in attendance took to the streets of Canton to once again march, chant and peacefully protest for equality and to end police brutality.

BREAKING: Following the end of the Peace Rally a protest has once again started in Canton. Here protesters are marching at the intersection of Dueber and Tusc toward I-77 @1480whbc pic.twitter.com/gKQJIA5SEQ

As the crowd approached the bridge over interstate 77, they were greeted by heavy law enforcement, who had parked their vehicles blocking the exit ramps for protesters to walk down. Protesters began to speak with Police as they passed by, asking them to join them in their march. A few did, creating a very powerful moment in solidarity.

BREAKING: Canton Police have joined the peaceful protest. I caught up with one of the protest leaders to hear his thoughts on the moment. @1480whbc pic.twitter.com/Jw5dNmCjAh

When asked what it meant to see police join in and walk with protesters after four days of demonstrations, Elijah Lamar, who is one of the protest leaders simply replied “It’s called progress.”

The protest had a wide range of supporters, including a few animals.

UPDATE: An actual pig has joined the protest here in Canton. @1480whbc pic.twitter.com/oY5Nh7tdRi

The crowd traveled from Tuscarawas Street to Harrison Street. They stopped at the corner of Harrison Street and 13th Street when they were once again met by Police who this time were blocking off the entrance to McKinley High School and the Pro Football Hall of Fame.

It was at this intersection where one member of the Louisville Police Department took a knee in unity with protesters, showing that he supports their cause. Here is a video of the crowd immediately reacting to the officer taking a knee.

Canton Police block protesters from walking toward the Pro Football Hall of Fame. One member of the Louisville PD kneels with the crowd in solidarity. The beginning of this video is the crowds reaction @1480whbc pic.twitter.com/FemQ5Zmpv2

Some protesters were upset that members of the Canton Police department did not join them in the demonstration while others were simply happy to receive support from any officer there. The crowd then headed back to downtown, making a few stops at intersections along the way.

The protest has made its way back to the intersection of 12th and Market. This is where Friday’s protest came to an end when tear gas was administered. Police are standing by once again, allowing protesters to continue their demonstration @1480whbc pic.twitter.com/M1v9QxPQFu

You can head to WHBC’s Facebook page for our live stop by stop coverage of Monday’s protest.