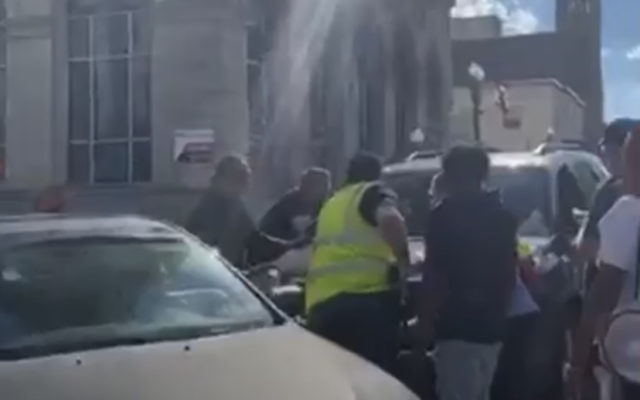 CANTON (News Talk 1480 WHBC) – A member of one of Canton’s most notable protest groups is once again facing charges. 34 year old Nathaniel Moran of North Canton turned himself over to Canton Police on Friday after he was made aware of the multiple warrants issued for his arrest.

On Wednesday, Moran was involved in an incident that took place during a protest being led by his group, Ohio Community Coalition. Protesters were blocking off the intersection of Tuscarawas Street and Market Avenue for a demonstration.

One vehicle refused to wait for the demonstration to end and was slowly attempting to drive through the group, who was in the middle of the street.

A member of one of Cantons protest groups is in jail. Nathaniel Moran turned himself into CPD on Friday. He’s charged with aggravated menacing & aggravated rioting. He is seen in the video (yellow vest) brandishing a gun at a vehicle attempting to drive through a demonstration. pic.twitter.com/rx8nvcrieS

Moran is seen in the video above, attempting to stop the vehicle from pushing through the demonstration. He and numerous other protesters are standing in front of the vehicle. As the driver continues to push forward, Moran brandishes a gun.

Following a meeting between the Ohio Community Coalition and the Canton Police Department, Moran became aware of warrants issued for his arrest. He turned himself in shortly after. The North Canton native is charged with aggravated menacing and aggravated rioting, a felony.

Stark County Jail records show this is not the first time Moran has been arrested since the protests began in Stark County. Moran was arrested for failure to disperse and disorderly conduct on May 29, which was the first night demonstrations took place in downtown Canton.

Ohio Community Coalition is upset with Moran’s arrest. They believe he did nothing more than attempt to defend the group from a driver who they say put numerous people in danger.

“[The driver] almost hit one of the cars that was parked as a barricade, protecting us from oncoming traffic,” Curstynn Marks of Ohio Community Coalition said. “She attempted to hit it and then she attempted to hit other protesters.”

Marks says Moran, along with multiple other group members attempted to speak with the driver and ask her to take a different route. In the full video the driver can be heard informing the group that they’re not allowed to be protesting in the street.

The full video can be found at the group’s Facebook page. The post was made on June 24.

Marks and group President Sierra Mason both said they were upset that Canton Police did not provide their group with protection during their demonstrations.

When asked if they were aware that it was against the law for them to block traffic during a protest, both said they knew the law existed but felt being in the street helps get their message across.

“The reason we are in the streets is because it helps us make a point,” said Marks. “If we just stand on the sidewalks, it is not actually giving us attention.”

“We were in the street but she shouldn’t have been hitting us,” said Mason, who believes Moran’s actions were justified. She claims Moran would not have had to step in if law enforcement was there.

Throughout the past month, Canton Police have been seen monitoring the protests and marches in different parts of the city. Officers have blocked off parts of Market Avenue near Central plaza for scheduled events and helped redirect traffic.

During a meeting with the department on Friday, Police told the group that if demonstrations continue to take place in the streets protesters will be arrested. Canton Police were unable to provide a comment for this story. WHBC News was unable to identify and locate the diver.

This is not the first time Ohio Community Coalition has had a member brandish a weapon during an altercation.

A post from the group’s Facebook page says a female member of the group pulled a knife out during a dispute with Unity Coalition of Canton on June 17. You can view that full post below.

Moran is the first member of the group to be arrested since it originally formed. Ohio Community Coalition has successfully gathered north of $25,000 worth of donations to serve as a bail fund. Moran was bailed out on Friday evening.