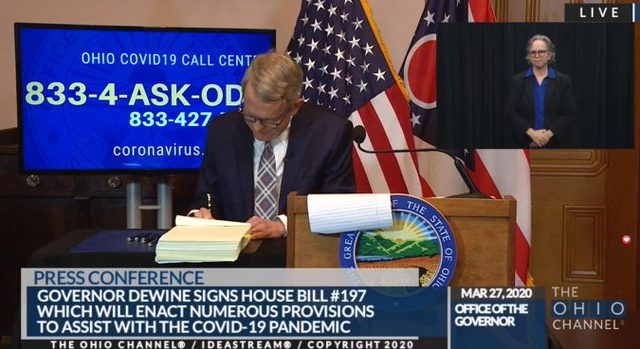 COLUMBUS (News Talk 1480 WHBC) – Another day, another press conference. Governor Mike DeWine spoke this afternoon providing updates on COVID-19 in Ohio. Here is a layout of everything that was discussed.

The Ohio Department of Health (ODH) reports that four more people have died from COVID-19, bringing the death count to 19 in the Buckeye State.

Dr. Amy Acton with the ODH says the deaths range from ages 58 to 93. The youngest and oldest deaths in Ohio were both in Stark County.

Below is a graph showing the age range of all confirmed cases of COVID-19.

Governor Mike DeWine opened his media availability signing House Bill 197 into law. The Bill is a COVID-19 relief package for the state of Ohio. The state house and Senate approved the bill on Wednesday, just hours after returning to work.

This bill waives regulations on schools, teachers, and students around requirements that formerly had to happen in person; ensures that state and local governments operate, but safely and in full transparency for the public; extends income tax deadline; and much more.

Ohio Senator Rob Portman joined DeWine via phone call to provide a layout of the National rescue package that was just by the House this afternoon. The package is worth nearly $2 trillion dollars.

“This will help keep people at work,” said Portman. “It helps those who have lost their jobs. It also, maybe most importantly, provides significant funding for our hospitals and healthcare providers to make sure we are dealing with COVID-19 in the right way.”

A few highlights of the emergency bill include a one-time payment to most Americans and adults with social security numbers.

Although the @ProFootballHOF in #Canton is temporarily closed, its campus became home to 500 American flags through its #HuddleUpAmerica program, and the generous support of Flags of Freedom. #InThisTogetherOhio pic.twitter.com/HoZ5ZuKzno

New Information from the Cleveland Clinic

This morning, Governor DeWine spoke with the Cleveland Clinic who gave him new information in regard toward the projections of COVID-19 in Ohio.

The Cleveland Clinic predicts that the large surge of confirmed cases and hospitalizations will come in two weeks. They project that Ohio might not hit the peak until mid-May.

Additionally, after reviewing the projected peak, the Cleveland Clinic says the state will need to increase its hospital capacity by three times. DeWine says hospitals have been planning for this but now they are starting to act.

In addition, they say at the projected peak, we need to go up 3x in our hospital capacity. We have a long way to go. This is the stark reality. The good news: the hospitals have all been planning for this. But now we are closing up the planning and moving toward the action. pic.twitter.com/Mj8GaYHF04

DeWine says the state has been divided into 8 regions. He asked each region to have their collective draft plans on his desk by 9am tomorrow and to have a final draft by noon on Monday. DeWine also asked the Ohio National Guard to oversee the buildup.