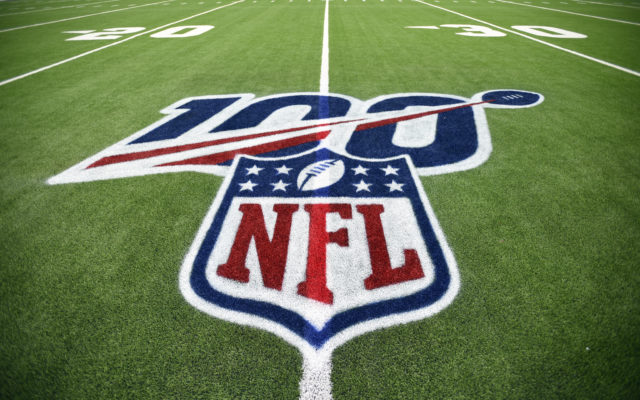 The 100th anniversary logo is shown above the NFL shield before an NFL wild-card playoff football game between the Buffalo Bills and Houston Texans Saturday, Jan. 4, 2020, in Houston. (AP Photo/Eric Christian Smith)

CANTON (News Talk 1480 WHBC) – Earlier this evening, National Football League announced the schedule for the 2020-2021 regular season. Here is a complete breakdown of some of the top games football fans will have to look forward to.

Breaking Down the Browns Schedule

The Browns have two prime time games this season. The first will be one most Ohio football fans will not forget. In week two of the season, Cleveland will host the Cincinnati Bengals in a Thursday night football match up that will take place on the NFL’s 100th birthday.

Two Ohio teams facing off just an hour away from where the league was founded, in Canton. Pro Football Hall of Fame President and CEO David Baker said this summer that the league plans to officially open Centennial Plaza during a special cutaway that will take place during the broadcast of that game.

For the second prime time game, the Browns will host the two-time defending AFC North champion Baltimore Ravens on Monday night football in week 14. The game will likely play a key part in the playoff race.

Just one week after their appearance on Monday night football, the Browns will head to the big apple where star receiver Odell Beckham Jr. will face off against his former team, the New York Giants.

OBJ had arguably his best game of the season last year in week two in the Browns win in New York over the Jets. The added motivation for one of the game’s top pass catchers should make for must see TV.

Ohio State fans will get a chance to watch a few former Buckeyes take on the Browns this season. Heisman trophy winning quarterback Joe Burrow, who played in Columbus before transferring to LSU will face Cleveland twice, including the prime time TNF matchup in week two.

Right after facing the top pick in this year’s draft, the Browns will take on the Redskins, who selected standout defensive end Chase Young with the second overall pick. There is a good chance Buckeye fans will see their favorite pass rusher from this past season go head to head against Browns first round pick Jedrick Wills Jr.

After seeing a dominant Ohio State player in the front seven, the Ohio football fans will be treated to an exciting matchup in the secondary in week eight when former Buckeye corner Damon Arnette will go head to head against the talented group of Cleveland pass catchers.

Finally, as always the Browns will face off against their rival, the Pittsburgh Steelers twice, with the home game serving as their final regular season contest of the upcoming season. The Browns will look to earn their first win in Pittsburgh since October 3, 2003, while the Steelers will look for their first victory in Cleveland since opening week in the 2017 season.

The Browns and Steelers will play in Cleveland during the final week of the NFL season in a game that should have playoff implications on the line.

The NFL season will open on Thursday, September 10 in Kansas City as the defending Super Bowl champion Chiefs will face off against the Houston Texans. Here is a list of the other prime time games this up coming season.