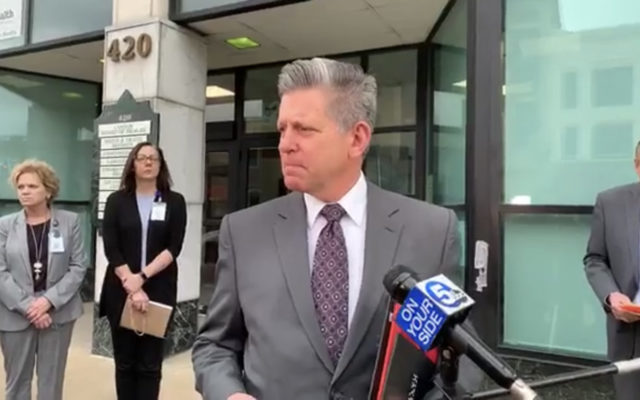 CANTON (News Talk 1480 WHBC) – It’s been over a month since the first round of major re-openings took place in the Buckeye State. In early May, a large portion of Ohioans were told they could finally return to work. By the end of the month, nearly 90% of the state’s economy had reopened.

Add in the re-openings and restarts that have taken place throughout the month of June and Ohio is currently as close to normal as it was before COVID-19 shut everything down. With more people out and about, state health experts were vocal about an anticipated spike in numbers.

Fortunately, that spike has yet to arrive in Stark County. In the past two weeks, data from both Stark County Public Health and the Ohio Department of Health (ODH) shows Stark has just two reported fatalities related to COVID-19.

Canton Health Commissioner Jim Adams tells WHBC News that the drop in fatalities is due in large part to the improved efforts of area nursing homes.

“When they were initially hit, most nursing homes didn’t have separate areas within the facility for people who were ill with COVID,” Adams explained. “It was a devastating time but it’s definitely a lot better now. [Nursing Homes] have learned very quickly about the best methods and practices for controlling an outbreak.”

ODH data shows that at least 77 of the 107 fatalities were connected to Long-Term Care facilities. Health officials were unable to confirm if the two most recent deaths in the county are included in that number.

Similar to the low fatality numbers, cases also seem to dropping. Data from Stark County Public Health shows that in a seven week span from April 5 to May 17, Stark County was averaging 81 new cases of COVID-19 per week. However, Stark is now on its way to five straight weeks with 60 or less cases.

Although a drop in numbers is the ultimate goal, one might wonder how or why it is occurring now, with the stay-at-home order long in the rear-view mirror. Adams says he hopes this is happening because local residents are simply doing their part.

“My hope is that we are doing the mitigation controls that we’ve been advised to do, such as social distancing, wearing face coverings and staying home if you are sick,” said Adams. “We are hoping that those are having the same effect as they did when we flattened the curve.”

A large part of the state’s mission to flatten the curve had to do with increasing testing. There are currently eight permanent testing sites located throughout Stark County, plus a pop-up testing site scheduled to be available on Monday, June 29.

Adams says he does not know how many people on average are tested weekly for COVID-19 throughout Stark County. However, he and other local health officials are looking forward to the day those numbers are available.

“Wouldn’t that be a great number to have,” Adams said. “I’ve asked for that several times but as of now, we do not know. Laboratories are supposed to report aggregate numbers to the state health department on a daily basis. It’s my understanding that they have until August to get that system implemented.”

Adams added that when the number is available, a plethora of information will follow.

“Its a really critical number to know because it gives us a denominator. We will then be able to start looking at rates of infection over periods of time.”

As testing continues to increase, Adams explains that Health Officials will get a more accurate idea of what the true infection rate of the community is.

Adams says he has seen infection rates range from 3%-6% throughout different areas of the country. With more of the general public getting tested each day, Stark County will continue find out where it stands.