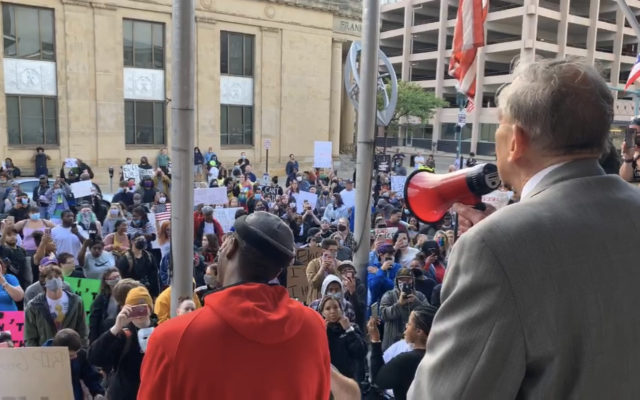 CANTON (News Talk 1480 WHBC) – As numerous cities throughout the nation see protests following the death of George Floyd, an African American man from Minnesota who was killed by a Minneapolis Police Officer, the city of Canton saw its own protest on Friday evening.

Word of a protest against Police brutality began to spread on social media early Friday morning. A graphic on Twitter and Facebook called for a gathering at 6 p.m. on the corner of Tuscarawas Street and Market Avenue near the Key Bank.

Upon arrival, the original crowd is small. A few dozen Stark County residents, both black and white, showed up, not knowing what to expect. Elec Simon, a prominent member of the Canton community was the first person to take charge.

We are here outside the Stark County Court Clerks office in Downtown Canton where dozens out Stark County residents have gathered to protest police brutality. Elic Simon of Canton provides a rundown of the message he hopes to send @1480whbc pic.twitter.com/7ySuAmL3FZ

As the crowd grew, different people with different opinions began to speak. The video below shows a debate between Simon and an older man on what the appropriate manor of a protest is.

After numerous people provided some powerful points of view, a few chants and even a song broke out. Here you see a much larger crowd singing “Lean on me.”

Perhaps some of the most powerful words of the evening weren’t the ones that were spoken but written. The crowd was filled with dozens if not hundreds of signs, ranging from “Black Lives Matter” to much more personal messages.

Danielle Williams, a 25 year old women from Canton, carried a sign that listed the names of African Americans that were killed because of their race.

Another sign or signs that gained attention was a duo of white teens who were holding signs that read “Black Lives Matter” and “I see you, I hear you.” Simon immediately noticed the boys and commended them.

Another notable moment from earlier today. Two white teens showed up with “Black Lives Matter” signs. They were embraced by the crowd immediately. A strong sign on unity. @1480whbc pic.twitter.com/R71xgOOmBE

Canton Mayor Tom Bernabei showed up about an hour into the protest. The Mayor spoke multiple times, receiving mixed reviews from the crowd. We were able to get an interview with Mayor Bernabei after the first time he spoke to the gathering.

The crowd walked through the streets of downtown and marched to the steps of city hall. When they arrived numerous members of the group spoke, all with various messages. (Warning, this video contains graphic language)

Following the stop at City Hall, the crowd moved to the Police Station where they chanted “I cant breathe.”

After stopping at City Hall the crowd moved to the police station. Chants of “I can’t breathe” were shouted. @1480whbc pic.twitter.com/MGIwlzzJcq

The protest was filled with people wearing masks to prevent the spread of COVID-19. More than half of the crowd was covered although social distancing was not great. For those who forgot a mask, one man, who wished to remain unnamed, was there providing the crowd with them, if they wished to take one.

I’d say close to 60% of the crowd was wearing masks. This man here, who wished to remain nameless, brought extra masks for those who needed one. @1480whbc pic.twitter.com/IiBj6LhOua

The protest came to an end around 9:30 p.m. when tear gas was administered by law enforcement. You can read more on that right here.