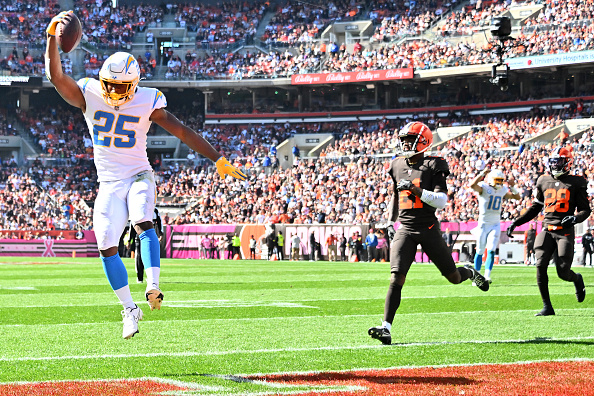 CLEVELAND, OHIO - OCTOBER 09: Joshua Kelley #25 of the Los Angeles Chargers celebrates after scoring a touchdown during the second quarter against the Cleveland Browns at FirstEnergy Stadium on October 09, 2022 in Cleveland, Ohio. (Photo by Jason Miller/Getty Images)

As bad as the defense played, giving up 238 yards on the ground to the worst rushing team in the NFL, the offense still had 2 chances to win the game late in the fourth quarter.
But on the first, quarterback Jacoby Brissett, on 3rd and 7 from the Chargers 9 yard line with 3:00 to go in the game, threw an interception in the end zone.
Then, after the Chargers unexplainably went for it on 4th and 1 from their own 46 yard line and were stoped, Browns kicker Cade York had a chance to win the game with :16 left, but his 54 yard field goal attempt saled wide right and Los Angeles prevailed. It was the second missed field goal in the game for Cleveland’s rookie kicker.
Nick Chubb led Cleveland’s offensive attack with 134 yards rushing and 2 touchdowns.
However Chargers running back Austin Ekeler was the star of the game, rushing for 173 yards in 1 touchdown, while also catching 4 passes for 26 yards and another score.
With the loss the Browns fall to (2-3) on the year, while the Chargers improved to (3-2).
Next up for Cleveland, a Sunday home game against the New England Patriots.
More about:
Cleveland Browns
Los Angeles Chargers