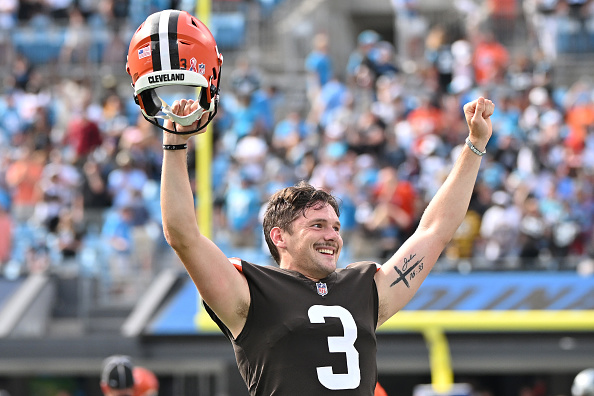 CHARLOTTE, NORTH CAROLINA - SEPTEMBER 11: Cade York #3 of the Cleveland Browns celebrates after making a 58-yard go-ahead field goal during the fourth quarter against the Carolina Panthers at Bank of America Stadium on September 11, 2022 in Charlotte, North Carolina. (Photo by Grant Halverson/Getty Images)
The thunder foot of 4th round draft pick Cade York lifted the Browns to a 26–24 victory over the Panthers in Carolina on Sunday.
The rookie’s 58 yard field goal with :08 seconds left made the Browns a winner on opening day for the first time since 2004.
It erased the comeback effort of former Browns quarterback Baker Mayfield as he rallied the Panthers from a 14-0 deficit to take a 24-23 lead with 1:13 left in the 4th quarter, only to have York’s kick spoil his revenge game.
Nick Chubb led the Browns offense with 141 yards rushing.
Kareem Hunt scored two touchdowns, one on the ground and one in the air.
Jacoby Brissett finished the game with 147 yards passing, the touchdown throw to Hunt and zero turnovers.
The (1-0) Browns will welcome the (0-1) Jets to First Energy Stadium next Sunday at 1PM.
More about:
Baker Mayfield
Cade York
Carolina Panthers
Cleveland Browns
Jacoby Brissett
Kareem Hunt
Nick Chubb